How is the Obama and the transition going? 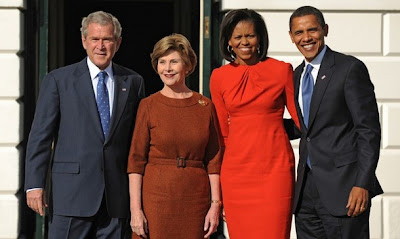 Frankly, not too badly. So far he has taken a very pragmatic conservative and middle of the road approach in both his statements and his selection of cabinet nominees. His talk about bold steps in fiscal stimulation was sensible and his statement that when things get better, he intends to go through the budget line by line to take out unnecessary and wasteful programs and spending was reassuring.
Obama has set a sober and restrained tone in his rhetoric. Yesterday, when pressed for a number on the fiscal stimulus, he wisely refused to throw out a number.

In tone and demeanor, Obama is serious and sensible. The man talks like he knows what he is doing. His reported decision to keep Gates on in Defense is cautious and pragmatic. Obama has probably distressed more on the left than he has on the Republican Right.

Will this last? We should all hope so. There will come a time when we will disagree. For the moment, let's hope that how he has begun is an indication of how he will lead.
Yesterday, Rufus observed that he was impressed with the way President Bush was handling the transition. I agree. The system is working and that is something that in which we can all take pride.