More Results of US Stupidity in Latin America 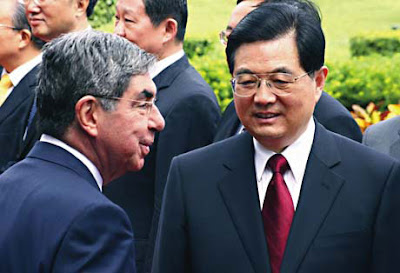 As trade with Costa Rica grows, so does Beijing’s influence in Latin America. US influence will decrease. The Colombian Free Trade agreement is a prime example. Why are we ruled by fools?

For the first time in history, a Chinese president has visited Central America, a former bastion of Taiwanese support and a region that the United States has long considered its backyard.

During Hu Jintao's visit to Costa Rica on Monday, the two nations agreed to begin negotiations on a free-trade agreement and work together to expand Costa Rica's national oil refinery.

China will also open a center here to spread Chinese language and culture, and the China Development Bank will offer $40 million in credit to the cash-strapped Banco Nacional.

Hu spent about 24 hours in Costa Rica with his wife, Liu Yongqing, and a delegation of about 110 people, including government officials, journalists and advisers. Separately, about 100 Chinese businessmen visited this week to meet with their Tico counterparts.

“China is ready to intensify its contacts with Costa Rica's government, Congress and political parties,” Hu said at a press conference Monday.

Hu's visit here, followed immediately by trips to Cuba and Peru, highlights China's growing influence in Latin America, where the U.S. has been largely politically absent.

In courting Latin America, China appears to be seeking raw materials, new export markets and diplomatic support from the region's 12 countries that still back Taiwan.

China's gifts to Costa Rica are a reward for President Oscar Arias' decision in June 2007 to recognize China and end a 63-year relationship with Taiwan, according to a secret memo that a Costa Rican high court recently made public.

During Hu's visit, China agreed to free up additional funds for a national soccer stadium in La Sabana Park, on the western edge of San José. China will invest $83 million in the stadium, to be built over the next two years by the Chinese firm Anhui Foreign Economic Construction Group.

Also this week, China National Petroleum Corporation agreed to help Costa Rica expand its national refinery in Moín on the Caribbean coast. The expansion, set to more than double the refinery's capacity, could take up to five years and cost $1 billion, to be divided between the two nations, said José León Desanti, president of Costa Rica's National Oil Refinery.

After the United States, China is Costa Rica's second most important trading partner, and commercial ties are set to strenghten over the next few years.

Trade officials will hold the first round of talks on a free-trade agreement Jan. 19 in San José, and negotiations will likely finish by early 2010, said Foreign Trade Minister Marco Vinicio Ruiz.

China is also donating 320 square meters of space to Costa Rica at the next World Expo, an international fair scheduled in Shanghai from May through October 2010.

Some companies are ahead of the game. Florida Bebidas, a subsidiary of Florida Ice & Farm, signed an agreement with the Chinese distributor Powersun on Monday to sell fruit juice and Imperial beer to Chinese consumers. Florida Bebidas will also distribute the Chinese beer Tsingtao here.

Trade with China has grown dramatically over the last five years. In 2002, just 0.64 percent of Costa Rica's exports went to China, compared to 9 percent in 2007. Ruiz said he expects exports to China to grow 11 percent under a free-trade agreement.

China is also seeking to strengthen cultural ties with Costa Rica through a new Confucius Institute, set to open soon at the University of Costa Rica (UCR). The center, funded jointly by the two nations, will offer Mandarin classes to students, teachers and the general public.

Costa Rica will be the eighth country in Latin America to have a Confucius Institute, joining Brazil, Peru, Chile, Argentina, Colombia, Cuba and Mexico.

China's generosity has impressed Costa Ricans and filled some of a niche once occupied by the United States. When asked in July to name Costa Rica's best friend, 25 percent of Ticos said China, while 29 percent named the United States. Two decades ago, 58 percent of Ticos considered Uncle Same the best, said Carlos Denton, president of CID-Gallup.

“The U.S. is disengaged,” Denton said. “That's why Costa Ricans aren't as conscious of the U.S. as a friend as they were 25 years ago.”

In the early 1980s, the U.S. pumped millions of dollars into Costa Rica's Central Bank to prop up the country's teetering economy. But the USAID mission in Costa Rica closed in 1996, and last year the Washinton, D.C., gave Costa Rica just $7 million in direct aid.

“The clasped hands have disappeared from Costa Rica,” Denton said, referring to the USAID emblem.

The United States is still Costa Rica's No. 1 destination for exports and the top source of tourists. And next month, Costa Rica is expected to join the Central American Free-Trade Agreement with the United States (CAFTA).

Still, as Costa Rica diversifies its exports, commercial ties with the North American giant have become less important. In 2002, half of Costa Rican exports went to the U.S., compared to 35.2 percent in 2007.

While China's ambitions in the region have raised eyebrows in Washington, U.S. Ambassador to Costa Rica Peter Cianchette seems unfazed. Stronger ties to China, he said, do not detract from Costa Rica's relationship with the United States.