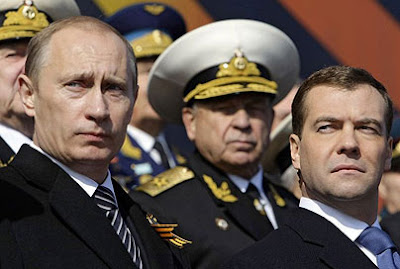 Medvedev said he had spoken with Obama by telephone and hoped to meet him in person soon.

"We hope to create frank and honest relations with the new administration and resolve problems that we were not able to resolve with the current administration," said Medvedev.

It looks as if our community organizer in chief wants to make a big splash fast. He and Medvedev are already chatting by phone and signaling negotiating points. It is almost too absurd to believe that Obama could be so rash and so foolish to even allow a hint of something so potentially dangerous, but if you look at some of the other dangerous liaisons Obama has maintained over the years, this should be no surprise.

The country in all it's foolishness has turned presidential leadership to an untested, untrained, unknown and otherwise unqualified enigmatic figure. Putin, through his wag Medvedev, is moving quickly sensing the naivete of the man.

In an interview with French daily newspaper Le Figaro published on Thursday, Medvedev said Moscow had no choice but to react to U.S. plans to set up a network of missiles and radar systems near its own frontiers.

"But we are ready to abandon this decision to deploy the missiles in Kaliningrad if the new American administration, after analyzing the real usefulness of a system to respond to 'rogue states', decides to abandon its anti-missile system," he said.

"We are ready to negotiate a 'zero option'. We are ready to reflect on a system of global security with the United States, the countries of the European Union and the Russian Federation."

Washington says the missile defense system it plans to set up in Poland and the Czech Republic is needed to protect the United States against missile strikes from what it calls rogue states, notably Iran.

Russia believes the system poses a threat to its security and last week announced plans to deploy Iskander tactical missiles in the Kaliningrad region bordering Poland in response.

Medvedev said he had spoken with Obama by telephone and hoped to meet him in person soon.

"We hope to create frank and honest relations with the new administration and resolve problems that we were not able to resolve with the current administration," he said.

Asked about his response to the global financial crisis, which has hit the Russian banking sector hard, Medvedev said there had been a flight of capital out of Russia and moves to protect key banks and private savings were necessary.

He said the government might take stakes in certain banks, as had been done in the United States and Britain but he said "nationalization is not the solution" and added that any government stakes would be sold as soon as possible.