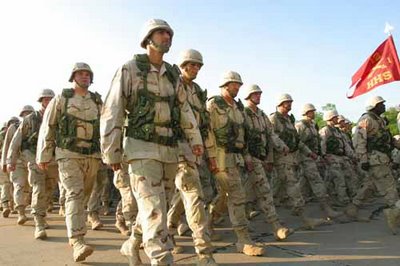 (Update) Hat Tip to Cutler for this
And as the previous post states we have to pay for them. Allen in the same post referred to this article published by Whit's partner Tiger at Observanda

More Troops
The consensus for a larger Army is about as complete as it could be.

"You can hardly read a story about Iraq these days without seeing an Army or Marine officer say he doesn't have enough troops to accomplish his mission. Senior officers respond that this is what junior commanders always say. That's not quite true. Commanders in charge of secondary missions often ask for more resources than they need, not recognizing their missions are less vital. But the calls for more troops in Iraq come from soldiers training Iraqis, from soldiers trying to secure Baghdad, from soldiers in Anbar. If all of these are secondary missions, where's the main effort? The truth is there are not enough ground forces in Iraq, and military officers are finally saying so in public."