Are These People The Same As Us? 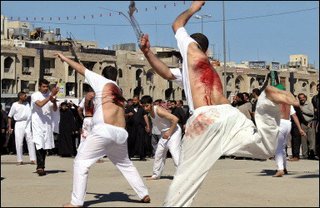 A very interesting opinion piece in the Telegraph. This would not have appeared a year ago. Progress is being made in western thinking.


From the London Sunday Telegraph

The Pope quotes a barbed medieval criticism of Islamic violence in the course of a scholarly discourse, and Muslims all over the world go into uproar; churches are firebombed. The Prime Minister's wife delivers a playful slap to a cheeky teenager, and six detectives rush to question her.

We are living in a world that has lost not only its sense of proportion but also its ability to discriminate.

In the case of Cherie Blair – who aimed a slap at a 17-year-old fencing champion while both of them giggled – it is hard not to conclude that it served her right. In her role as a trendy human rights lawyer, she has helped foster the nosy paranoia that led the Child Protection in Sport Unit to call the police. That said, however, Mrs Blair was clearly guilty of nothing more than a sense of humour.


By contrast, it is not immediately apparent how much blame to attach to Benedict XVI for the worldwide furore over last week's lecture. On reflection, the answer must be: not very much. Presumably, the Pope regrets quoting the Byzantine emperor's opinion that aspects of Islam were "inhuman". Moderate Muslims have been upset by it, and Benedict reiterated yesterday that he was sorry that they had taken offence. But he is even more sorry that this offence has been exacerbated by the deliberate manipulation of his words by Islamic firebrands and their slick media operation.

The combination of grievance-nurturing multiculturalism and instant headlines is having a disastrous effect on the worldwide Muslim community. There seems to be no limit to its spokesmen's willingness to voice outrage; and their messages are then picked up by fanatics who mount appalling attacks on Christians in Muslim countries. When was the last time a Muslim leader apologised for such atrocities?

The truth is that barbaric attacks happen weekly. No wonder that Benedict favours an urgent dialogue with Muslims on the subject of religious violence, rather than the usual touchy-feely exchange of compliments.

Well, he has started a dialogue now, albeit not quite in the way that he intended. And it is essential that it continue. A self-abasing apology from the Pope would have postponed that discussion yet again.

We suspect that Western public opinion is not displeased that Benedict has said the unsayable. Now it is time for other churchmen to tell their Muslim counterparts that, in addition to dishing out criticism, they must learn how to take it."

Eleven people were charged yesterday in connection with an alleged plot to blow up transatlantic airliners as police revealed that they had found suspected bomb-making equipment and martyrdom videos.

Eight are accused of conspiracy to murder by planning to smuggle the components of bombs on to aircraft, assemble them and detonate them.

Anti-terrorism officers said that since the arrests on Aug 10 they had found potential bomb-making equipment, including hydrogen peroxide and electrical components.

They have also recovered martyrdom videos of the kind left behind by the July 7 bombers Mohammed Siddique Khan and Shezhad Tanweer. Police sources said that airline tickets had also been found."..
Posted by Deuce ☂ at 9/18/2006 03:31:00 AM