For Peace, Please Do Not Offend The Muslims 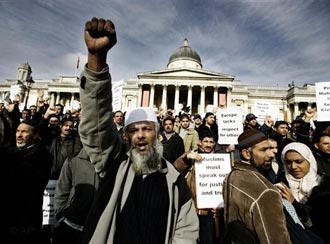 After a day of protest in the West Bank and Gaza Strip, Palestinian gunmen responded to the Pope's comments by attacking churches.

No one was hurt in a string of fire bombings and shootings that caused no major damage. Five churches came under attack in the West Bank city of Nablus, where militant groups have long been the dominating force.

In a second wave of attacks several hours later, Palestinian assailants, this time unmasked, poured petrol outside the gates of the Roman Catholic, Greek Catholic and Protestant churches, starting fires that were swiftly extinguished, witnesses said.