Another in the "Islam is the Problem" series. 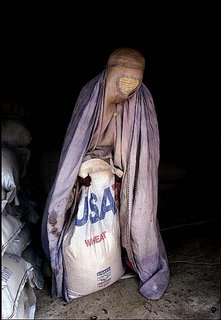 Karzai says in this article that troops alone cannot end terror in Afghanistan. Probably not, and he suggests the problem is in Pakistan. I think based on this picture there may even be a larger problem.

By David Ljunggren and Michelle Nichols
NEW YORK (Reuters) - Foreign troops in Afghanistan will not be able to end attacks by Taliban militants unless "terrorist sanctuaries" outside the country are destroyed, President Hamid Karzai said on Wednesday, in a clear reference to Pakistan.

NATO troops are battling to quell the heaviest bout of violence in Afghanistan since 2001 when U.S.-led forces overthrew the Islamic-fundamentalist Taliban, which had been sheltering Osama bin-Laden and his al Qaeda organization.

Karzai told the U.N. General Assembly that outsiders, whom he did not identify, were behind the new upsurge of violence.

"Military action in Afghanistan alone, therefore, will not deliver our shared goal of eliminating terrorism," he told the U.N. General Assembly. There are around 41,000 foreign troops in Afghanistan.

Pro-Taliban militants and the Pakistani government reached a deal on Sept. 5 under which the militants agreed to stop attacks in the country and in Afghanistan in return for a halt in government's operations in the region.

Critics say Pakistan's government has virtually caved in to the militants' demands and the strategy risked creating a safe haven for Taliban insurgents and their al Qaeda allies.

But Pakistani President Pervez Musharraf, speaking in New York, said the deal was with tribal elders rather than militants and represented "the best strategy we have employed" against the Taliban.

Rebels can freely cross the mountainous frontier between the two countries. Some Afghan leaders have accused Islamabad of failing to do enough to stop infiltration, or even of continuing to support its former protege, the Taliban.

U.S. President George W. Bush will host a joint meeting in Washington next week with Karzai and Musharraf.

He also said there was a misperception that Pakistan was a base for terrorism.

"Yes indeed there are people who are abetting, supporting the terrorists in the tribal agencies of Pakistan. As I said, al Qaeda had its base there with more bias in Pakistan, less in Afghanistan," he said.

"But Taliban, the command echelon, the control of (leader) Mullah Omar is in the southern provinces of Afghanistan."