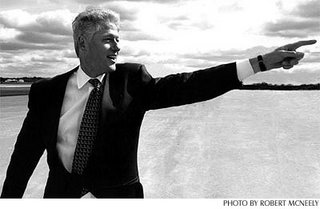 Chris Wallace got an earful when Bill Clinton got in his face after Wallace asked him the wrong question about bin-Laden. Looks like the movie Path to 9/11 touched a nerve.

WALLACE: Do you think you did enough sir?

CLINTON: No, because I didn’t get him