Hey Gringo. You Snooze, You Lose 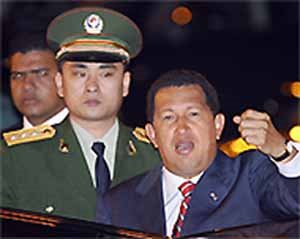 While the vast resources of the US are engaged elsewhere, Latin America is being hosted by the still very red Chinese. Today's Washington Post discusses growing Chinese influence in Latin America. China a communist controlled state, is rapidly developing trade, diplomatic, and military ties with Latin America and the Caribbean. China plays key roles in Asian geopolitics and has designs to increase its influence in Latin America and Africa. China is a nuclear power, it is a member of the U.N. Security Council and also opposes US interests. China is now a member of the World Trade Organization, the Group of 77 developing nations, and the Asia Pacific Economic Coopera­tion group. China also holds observer status in the Organization of American States. An earlier article from the Heritage Foundation makes the following observations:

According to former U.S. Ambassador to Beijing James Lilly, “The facts are that [the Chinese] run massive intelligence operations against us, they make open statements against us, their high-level documents show that they are not friendly to us.” Chinese military white papers promote power pro jection and describe U.S. policies as “hegemonism and power politics.”

In the Western Hemisphere, the Chinese are taking advantage of failures of half-hearted mar ket reforms and Washington’s unwillingness to pursue neighborhood relations with much enthu siasm. National Defense University professor Cyn thia A. Watson notes, “[T]he 1990s turned into a period of severe disappointment as free markets led to rampant corruption and unfulfilled expec tations in Latin America while Washington became the world’s superpower rather than a part ner for the region.”

The level of Chinese influence is expanding on all economic, political, cultural and quasi military levels. Chinese business man own industrial parks, apartments and are rapidaly purchasing influence and prestige throughout the region. The Hertigae article goes on to point out:

In April 2001, Chinese President Jiang Zemin pre sided over a 12-day mission to cement economic and trade ties, as well as attack what he called Washington’s “unipolar” scheme.[5] His itinerary included Argentina, Uruguay, Brazil, Cuba, and Venezuela. Li Peng, chairman of the Standing Com mittee of the People’s National Congress, followed up with more visits in November 2001. In Novem ber 2004, President Hu Jintao flew to Argentina, Brazil, Chile, and Cuba, where he signed 39 bilat­eral agreements and announced $100 billion in investments over the next 10 years. In May of this year, Communist Party Chairman Jia Qinglin vis ited Colombia, Mexico, Uruguay, and Cuba.

Building on simple commercial agreements, China has advanced to economic assistance, direct investment, a few joint ventures, and military ties. When Argentina’s financial collapse rippled through South America’s Southern Cone, China quickly seized the chance to increase its stake in Argentina and Brazil, while U.S. investment declined by nearly half. Joint ventures include part nerships with Great Dragon Telecom in Cuba as well as Colombia. China is partnering with Brazil to improve that country’s railways and establish a rail link to the Pacific to cut transportation costs of iron ore and soybeans. Chile’s congested port at Antofa gasta may get a facelift thanks to the PRC.

To meet domestic industrial needs and con sumer demand, China has pursued investments and agreements with such oil producers as Venezu ela, Ecuador, Colombia, Argentina, Brazil, and even Mexico. The best fit is with Venezuela’s authoritar ian leader Hugo Chávez, who directly controls the state oil industry. President Chávez has invited the Chinese National Petroleum Corporation (CNPC) to participate in exploring the rich Orinoco belt. Meanwhile, the CNPC has invested $300 million in technology to use Venezuela’s Orimulsion fuel in Chinese power plants.