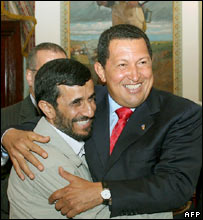 Iran is backing Venezuela's bid to join the UN Security Council
Iran and Venezuela have signed a string of bilateral agreements at the start of Iranian leader Mahmoud Ahmadinejad's visit to the Latin American country.
Mr Ahmadinejad and Venezuelan President Hugo Chavez signed accords including oil exploration and car production.

President Chavez said the visit would strengthen the strategic alliance between the two states.

The Iranian leader was earlier welcomed to the Venezuelan capital, Caracas, with full military honours.

Iran and Venezuela have emerged as leaders of a growing anti-US front of developing countries."

China, Cuba, Syria, Iran and Russia are all a few of recent deals and visits by Hugo Chavez. We have what can at best be kindly called an open border to our southern neighbors. Venezuela is an important country because of its location and oil. Would someone pleace ask GWB to put down the weights for fifteen minutes a day and read some briefs about what is going on in Latin America. Is the Monroe Doctrine dead beyond revival?
Posted by Deuce ☂ at 9/18/2006 02:31:00 AM