Peace in Our Time

The picture tells the story: 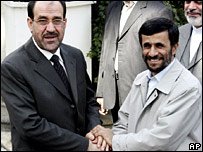 Iran offers Iraq 'full support'
Iran-Iraq relations have improved since Saddam Hussein's overthrow
Iranian President Mahmoud Ahmadinejad has offered Iraq full support in stabilising the security situation in the country.
He made the remarks in Tehran after talks with the Iraqi Prime Minister Nouri Maliki.
Speaking to reporters after their meeting, Mr Ahmadinejad said "Iraq's security is Iran's security".
Mr Maliki is making his first official visit to Iran since he took office in May.
"Iran supports the Iraqi government that has been created by the Iraqi people's votes, and strengthening a united and independent Iraq is in the interest of all the region", Mr Ahmadinejad said.
Mr Maliki said his discussions with Mr Ahmadinejad had been positive. "Even in security issues there is no barrier in the way of co-operation."

Along with Russian and Chinese opposition to strong sanctions against Iran, it appears that all parties are backing away from the edge of the precipice.