Biting Off More Than They Can Chew 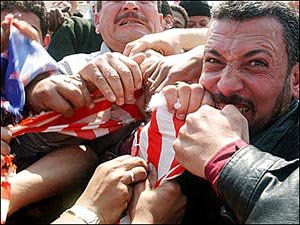 "America is generally slow to awaken to danger, but once roused it is a fierce fighter. A few voices are warning our potential foes. But they are not listening. Those of us who do not want to see a convulsive death struggle play out on the world stage, who want to see the drama go from a tragedy to a farce, have our work cut out."- Thomas Lifson

Comment: So ends a thoughtful piece written by Thomas Lifson, editor and publisher of The American Thinker. His premise is that the Islamists have overplayed their hand, and at some point, they will trigger something in the American public that will be hard to stop. He bases this on the recent Islamic reaction to the Pope.

I am a relative neophyte to the blogging world, but have always been a news junky. Since the sixties, I have watched the Left set the political and social agenda. Much of what they started is being played out in the struggle between Islam and the West. It was the agenda of the Left that allowed for the thoughtless migration of Muslims into the US and Europe. It was their agenda and view on racial equality, moral relativism, multi-culturalism, civil rights and moral equivalency that allowed and encouraged Islam to set up camp in the West and not require them to adapt to their new homes and countries. Worse, this Western lack of certitude encouraged Islamists to take the position of moral superioity and religious hegemony over what they saw as Western decadence. The Islamists feel they can get away with anything, because they have. They are deadly wrong and perilously close to unleashing something in the American public that will give Islam a lesson it will not soon forget.

The Dark View of Islam and the American Street