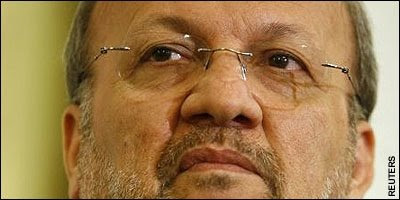 What an interesting dynamic place is the Middle East.

Nouri al-Maliki, Iraqi prime minister, tried at the weekend to allay Iranian concerns about a possible US-Iraqi treaty that might provide for a long-term US troop presence in Iraq.

“We will not let Iraq become a base for hurting Iran’s security,” he was quoted as saying.

His talks were likely to focus on the so-called “status of forces” agreement with the US, and Iran’s alleged support for militias in Iraq.

Iran has strongly opposed the agreement, which the influential former president Akbar Hashemi-Rafsanjani said last week would “turn the Iraqis into slaves before the Americans”.

Tehran fears that a long-term US presence in Iraq could be used as a base for military intervention in Iran.

A status of forces accord has also been controversial inside Iraq, where many fear that it will erode Iraq’s sovereignty, as well as extend the freedom of action and lack of accountability already enjoyed by US-led multinational forces inside their country.

Iraqi parties across the political spectrum have raised concerns about the agreement, while Mr Maliki’s government has signalled that it has a different “vision” of the accord from Washington’s.

Although the administration of US President George W. Bush reportedly wants the agreement to be approved quickly, many Iraqi politicians would be happy to see it postponed.

The multinational force is currently governed by a series of United Nations resolutions. Some have suggested that the UN mandate could simply be renewed once again.

Meanwhile, Mr Maliki is also likely to raise the issue of Iranian security agencies’ alleged support for Iraqi insurgents, particularly for splinter groups of the radical Shia Mahdi Army militia. In May, Mr Maliki formed a committee to document Iran’s “interference” in Iraq.

Iran officially denies the charges, but regime insiders privately admit such operations and say Iraq has turned into a battlefield between Iran, US and some regional countries that are against the ruling of a Shia government in Baghdad.

Analysts, however, say that Iranian strategists are careful not to overplay their hand and alienate Tehran’s potential allies in Baghdad.

The Islamic republic has also balanced any support to anti-government militias with strong diplomatic and occasionally financial support for the government.

“Iran has decreased its [militia support] operations in Iraq compared to a year ago, due to US pressure,” said a former senior official. “The US has been relatively successful in distancing Maliki from Iran.”