Can the Dollar be Saved? 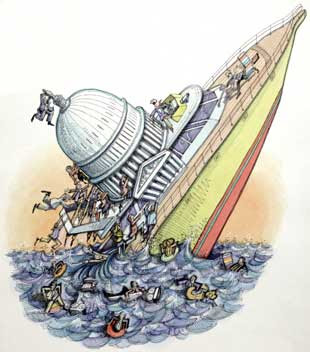 Why is Bernanke only using words to help stabilize the dollar? Because he does not have the currency to do it. The Treasury has somehwere around $75 billion in foreign currency reserves with which it could intervene. Turkey, Poland and Libya each have more. China, alone added $75 billion in May.

Look at these headlines:

China's foreign reserves, already the world's largest, rose to US$1.8 trillion at the end of May but growth slowed, a government newspaper reported Friday.

The reserves grew by US$40.3 billion in May, well below the April increase of US$75 billion, the China Securities Journal said, citing data from the State Administration of Foreign Exchange.
_____________
(Brazil) CENTRAL BANK: Foreign reserves exceed US$200bn for 1st time

Russia's gold and currency reserves stood at $558.7bn as of June 20, up $7.2bn, or 1.3 percent, from the previous showing. Combined with a $70.5bn rise over the previous 18 weeks, reserves have climbed a total of $77.7bn, or 16 percent, in 95 working days. The rapid increase in reserves can be attributed to the euro's significant advance against the dollar on international exchanges, as well as a stepping-up in the Central Bank's purchases of foreign currency on the domestic market. As a result, Russia has somewhat narrowed the gap separating it from China and Japan, the global leaders in terms of reserves, which exceed $1.75 trillion in China and amount to roughly $1.015 trillion in Japan.