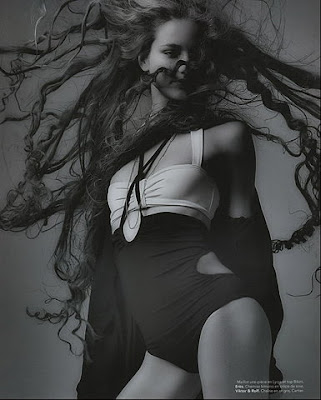 A permanent solution to a temporary problem. How bad could it have been? I posted a video of her taping a perfume commercial. Look at the irony at 1:20 as she gets frightened while being up on a ladder.

NEW YORK (Hollywood Today) 6/29/08 – The life of successful fashion model Ruslana Korshunova was cut short Saturday afternoon after the young Kazakhstani fell from the balcony of her apartment in Lower Manhattan to the pavement below. According to an anonymous police source cited by local newspaper Newsday, Korshunova’s death, which occurred just four days before her 21st birthday, was being treated as a suicide.

It isn’t always psychologically easy for models who are suddenly flush with money and attention at a very young age. Drugs and a decadent lifestyle are always a temptation. Yet there was construction underway on the balcony which could mean it was accidental. And a cut in the temporary netting could indicate something more nefarious.

Korshunova dropped from the ninth floor of the Water Street building, which was under construction, at approximately 2:30 p.m. According to the New York Post, there was a gap (apparently cut) in the construction netting covering the balcony. Additionally, both publications reported that police found no obvious signs of struggle inside the model’s home.

Korshunova, who was represented in New York by IMG Models, had previously appeared on the covers of major magazines, including international versions of Elle and Vogue, and had done extensive work for a variety of major designers, including Vera Wang and Libertine.