Obama- Know a Man by his Friends 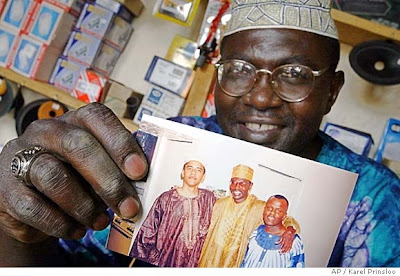 You really have to surrender all manner of common sense to believe that Barack Obama is anything but a left wing Afro-centric radical. Now that the Democrats have tied their future to this man, the examination as to who he is can begin. The exposure to the American public will expose the rift in just how far the US has moved to the left. Will the American people buy the friend, darling and messianic visionary love child of the American Radical Left?
_____________☂_____________
Obama's associations may haunt bid

Both men have ties to Sen. Barack Obama, the presumptive Democratic presidential nominee, and may well show up in even more anti-Obama ads than they already have.

These days, presidential candidates can expect to have every personal relationship, new or ancient, investigated, and if there's political hay to be made, a version of the details is quickly out. All candidates have their associations questioned, but it's especially true for Mr. Obama, still a newcomer to the national scene. Voters haven't had years to form impressions based on what he has said or the legislation he's supported.

Associations already have produced one crisis for Mr. Obama — the furor over the Rev. Jeremiah A. Wright Jr., his spiritual mentor. Here are brief descriptions of some other people who may show up in ads, debate questions and Internet chatter over the coming months. 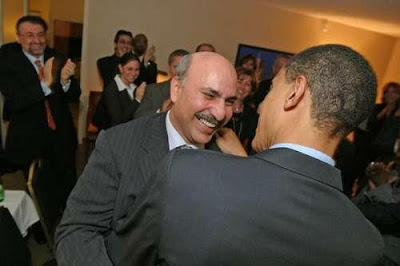 Antoin Rezko: "Tony" Rezko is a businessman who has helped raise campaign money for Mr. Obama and many other Illinois politicians. He was convicted Wednesday on 16 of 24 counts involving mail fraud, wire fraud, money laundering and aiding and abetting bribery.

The charges have no connection to Mr. Obama, but Rezko is tied to the Illinois senator in other ways.

Rezko and his family donated at least $21,457 to Mr. Obama and helped raise over $200,000 more, though not for his presidential bid. He also advised Mr. Obama on the purchase of a new Chicago home and, in his wife's name, purchased a vacant lot next door to the new Obama home when the seller wanted to dispose of both properties at the same time. Rezko then sold a slice of the property to Mr. Obama.

Mr. Obama has donated Rezko's contributions to charity and says it was a mistake to work with Rezko on buying the house. 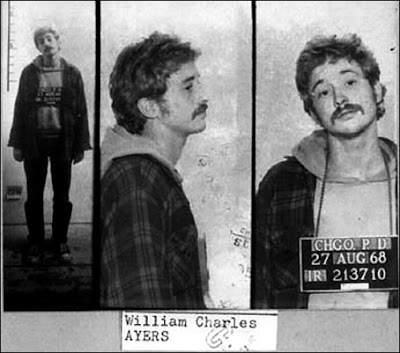 William Ayers: Today, Mr. Ayers is a university professor and a member of Chicago's intellectual establishment. Forty years ago he was a member of the Weather Underground, a radical group that claimed responsibility for a series of bombings, including at the Pentagon and U.S. Capitol.

Mr. Ayers was a fugitive for years with his wife, fellow radical Bernadine Dohrn. But after surrendering in 1980, the charges against Mr. Ayers were dropped because of prosecutorial misconduct.

Mr. Obama and Mr. Ayers served together on the board of a Chicago charity and were co-panelists on at least two academic panel discussions and an academic testimonial — two of them at the University of Chicago. In the mid-1990s, when Mr. Obama first ran for office, Mr. Ayers hosted a meet-the-candidate session for Mr. Obama at his home. 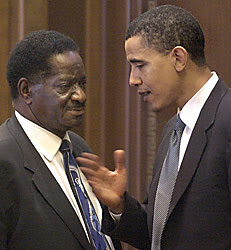 Emil Jones Jr.: Mr. Jones, the president of the Illinois Senate, amounts to Mr. Obama's political godfather and was an important part of his longshot victory for U.S. Senate in 2004. He helped the little-known politician meet the right people, and he picked Mr. Obama to handle high-profile legislation during the two years leading up to the election.

Mr. Jones is known for steering state money to a few favored institutions, including some that employ his relatives. Several of his relatives have gotten state jobs, and his wife's government salary jumped 60 percent after he became Senate president. He has played an important role in blocking ethics legislation in Illinois. 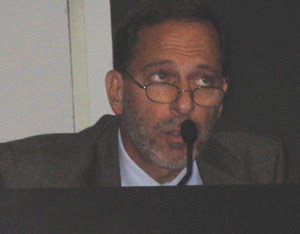 Rashid Khalidi: Mr. Khalidi is a Palestinian scholar and author on Middle Eastern affairs who has called Israel a racist state bent on creating "an apartheid system." He's also a friend of Mr. Obama.

They met while both were teaching at the University of Chicago and living in the same neighborhood. Mr. Obama and his wife sometimes had dinner with Mr. Khalidi and his wife, Mona. The Khalidis hosted a political fundraiser for Mr. Obama in 2000, and the Woods Fund charity gave money to the Arab-American Action Network, run by Mrs. Khalidi, while Mr. Obama served on the charity's board.

Mr. Obama has said they hold very different opinions on Israeli issues, though Mr. Khalidi praised Mr. Obama as "the only candidate who has expressed sympathy for the Palestinian cause" and for his willingness to hold talks with Iran, which has called for Israel to be "wiped off the map." 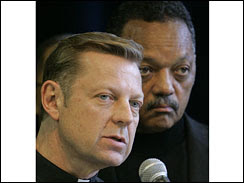 The Rev. Michael Pfleger: Father Pfleger, the white, longtime pastor of a mostly black Catholic parish in Chicago, has been protesting everything from gun shops to Jerry Springer. Mr. Obama has referred to him as a spiritual adviser and used him as a political supporter.

Last month, he visited Trinity United Church of Christ, Mr. Obama's church at the time, and preached a sermon in which he mocked Sen. Hillary Rodham Clinton as expecting to win the presidential nomination because she was white. Mr. Obama, who condemned the remarks and resigned from the church, was not nearly as close to Father Pfleger as he was to Mr. Wright.