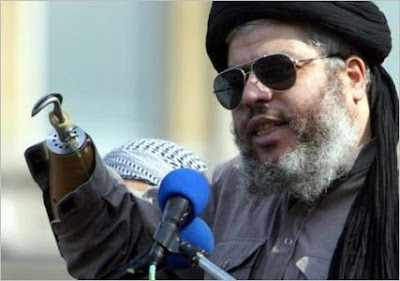 HE WAS A VERY GOOD BOY.

Two judges ruled that the decision to extradite Hamza was "unassailable" and he should be sent to the US where he faces terrorism related charges.

Egyptian-born Hamza, 51, from west London, who is fitted with hooks on both partially-amputated arms, is serving a seven-year jail term in the UK for stirring up racial hatred and inciting followers to murder non-believers.

The US authorities want him to stand trial there for allegedly attempting to set up an al-Qa'eda training camp in Oregon.

He could face a total of 11 terrorism charges in the US including sending money and recruits to assist al-Qa'eda and the Taliban in Afghanistan.

At the High Court in London today Sir Igor Judge and Mr Justice Sullivan dismissed his appeal against extradition.

But they gave Hamza's lawyers 14 days to apply for leave to launch a final appeal to the House of Lords.

His lawyers had argued extradition is unlawful because evidence gained by torture is being used against him and that, if there is to be any further trial, it should take place in London.

They also contended that it would be "unjust and oppressive" to extradite Hamza because of the passage of time since the alleged offences and it would breach his human rights.

London's City of Westminster Magistrates Court had previously ruled that he could be extradited and in February this year Home Secretary Jacqui Smith gave her approval.

The July 7 London bombers were inspired by Hamza's sermons and the would-be bombers of July 21 were regular worshippers at the Finsbury Park mosque in north London where he was formerly the imam. In 2003 he was dismissed from his position there after making inflammatory speeches.