Senator Chuck Hagel spent 13 months in the Mekong Delta from 1967-1968. He was a grunt. He received the Vietnamese Cross of Gallantry, Purple Heart, Army Commendation Medal, and the Combat Infantryman Badge. After returning from Vietnam, Hagel worked as a bartender and radio newscaster while finishing college. He went on to become the senior US Senator from Nebraska and he is calling it quits. 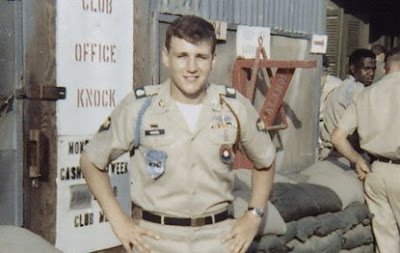 In a March 2007 interview with the NY Times he said, "His faith in the rightness of the Vietnam War was worn down by reading history and traveling abroad, but what changed his mind most, he said, was listening to tape recordings released in the late 1990’s of telephone conversations in which President Lyndon B. Johnson confided that he saw the war as pointless. That was in 1964, and Mr. Johnson said he feared impeachment if he tried to withdraw.

“The dishonesty of it was astounding — criminal, really,” Mr. Hagel said. “I came to the conclusion that they used those people, used our young people. So I am very careful, especially now. We’d better ask all the tough questions. This administration dismissed every tough question we asked. We were assured, ‘We know what we’re doing.’ That’s what they said in Vietnam.”...

Hagel reminds me of most of my friends and contemporaries who actually served in the military and Viet Nam. Their views on war are several decibels below those that did not. Some interesting comments from Spiegel:

SPIEGEL: It doesn’t look good for your own party. After seven years of George W. Bush, 81 percent of Americans believe that the country is on the wrong track and only 27 percent have a favorable view. What went wrong?

Hagel: The party is in terrible shape and it is because we did not do a very good job of managing this country. We have gotten into two wars. We have run up a third of the national debt in the last seven years. So we have controlled the government and we have made a lot of mistakes. All the same, McCain and Obama are within the margin of error in the polls.

SPIEGEL: Is the era of the hawks in your party definitely over?

Hagel: I hope so. That segment of the Republican Party, the so-called neocons, held the Republican Party hostage much of the time. What this element has done to our party is clear now and I would hope that it will come back to the party of Eisenhower, even the party of Ronald Reagan. Today’s party is no longer Ronald Reagan’s party, who, contrary to his reputation, governed from the center. But he sat down with the Soviets, the great evil empire, and was able to get results, for example in nuclear disarmament.

SPIEGEL: You write in your new book about former German Chancellor Helmut Schmidt visiting you in your office in the Senate, chain-smoking and complaining that “there are no more great leaders." Do you agree?

Hagel: Today, I don’t see any great global leaders of the stature of Reagan, Kohl, Mitterand and Thatcher. They were important, whether you agreed with them or not. But as Schmidt also told me in my office, there will come a time when we will find those new leaders again.

SPIEGEL: A lot of Germans hope Obama is that someone.

Hagel: He could be. But until he is in office, you don’t know.