EU Solution to Losing Elections - Stop Having Them. 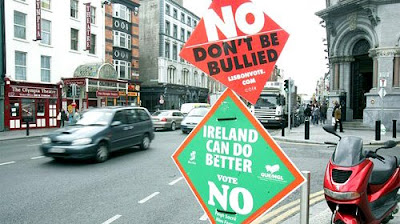 So far, the people of France and the Netherlands rejected the first try at imposing a treaty on Europe by the EU. The EUcrats, went back to the drawing board and only one country was to vote on the Lisbon treaty, the bloody Irish. They did, didn't like it, and rejected it. The EUcrats have again been flummoxed by the democracy on which the European Union is supposed to be founded. Imagine that.

The Telegraph sums it up:

"...It is very hard for the political elite in Europe to accept that their dream of ever-greater integration does not carry conviction with their own electorates. They refused to admit this when France and Holland voted "No" and instead pretended that public resistance could be overcome by committing themselves privately to not having any referenda.

Fortunately for the EU's democracy the Irish constitution demanded such a step and the Irish people have now spoken for millions in Europe. Yet still the elite try and pretend that they can avoid facing the reality that their dream of integration in many countries is unloved and unsupported."

France's finance minister has strong hopes that the European Union will soon have another treaty on reforms to replace one rejected by Irish voters.

"We will certainly go through an in depth analysis of what took place and what did not take place," French Economy Minister Christine Lagarde told a seminar on Asian integration in South Koera.

She said implementing the Lisbon Treaty was "going to be difficult".
Irish voters on Friday rejected the treaty to overhaul the European Union's unwieldy institutions, putting the entire bloc's reform plan in peril and humiliating Ireland's political leaders.

The pact, known as the Lisbon treaty, failed by a margin of 53.4 to 46.6 percent in the only EU country to put it to a popular vote.

But just as the Lisbon treaty was drafted after France and the Netherlands rejected the previous treaty, Lagarde said she was "absolutely certain" there would be another Lisbon or some other agreement on reforms.

"We Europeans believe that it is either all of us or none of us," she said.
The treaty was an effort to resurrect EU reforms that were torpedoed by French and Dutch voters in 2005.

This time all countries but Ireland avoided a referendum. The "No" vote means a country with fewer than 1 percent of the EU's 490 million population could doom a treaty painstakingly negotiated by all 27 member states.

The treaty envisages a long-term president of the European Council of EU leaders, a stronger foreign policy chief and a mutual defence pact. It was due to take effect on Jan. 1, but cannot come into force if a single member fails to ratify it.