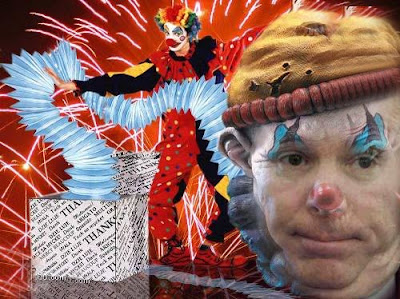 Arriana Huffington has always been the queen of the big top, but the queen's blog may have the top act of this election cycle. Step right up folks and be amazed.
When McCain Drops Out Huffington Post - Yahoo

When the Republicans choose their candidate on September 4th, there is a very real chance that they could throw the election into an unexpected chaos as they pull a genuine September Surprise.

I think there is every reason to believe John McCain won't be the nominee. Ok, let me say that again. McCain will not be the Republican candidate in November.

Here's how it could happen:

At some point in mid August, John McCain will announce that he has decided that he can not accept his party's nomination for president. The reason will be health-related, and that may turn out to be the truth. Anyone who's seen him on stage these days knows he looks like he's about to keel over. And anyone who's been on a presidential campaign knows the physical demands are grueling and can be a challenge for a young man.

But excuses or facts hardly matters. He won't be accepting his party's nomination.

The reasons are simple. He can't win. Now that Obama is the presumptive Democratic nominee -- the polls all show that McCain's pro-war stance and Bush endorsement make him a lost cause in November. That combined with soft stand on litmus test conservative issues make him an unpopular candidate among the base. I know some Democrats that think the Republicans are planning to let McCain lose and 'sit this one out' so that they can hang the democrats with a bad economy and a war that is a morass. But that just isn't how they play. They play to win every hand -- think about 2000 with a popular Democratic president and good economy and a solid VP running for president. Why did they put up Bush? And why did they fight so hard? Because, you don't ever throw a game. And they're not going to throw this one.

McCain won't be the nominee.

By August, they'll have done something to try and pick away at Obama's popularity. They'll emphasis race, or whatever they can to get him to appear less than perfect. Then, they'll bring out of the woodwork a surprise candidate who can shift the story fast. With just two months before the election -- the new candidate will have little time to be 'vetted' but will be shiny and new, and will get a lot of media attention as Obama's newness will have become -- by then -- tarnished or at least no longer the surprise that it has been as he unseated Hillary.

So, who will be the Republican candidate that faces Obama in the fall?

I've spoken to a number of friends who -- when presented with this set of facts respond: "but they don't have anybody else." That's simply not the case.

Joe Trippi, campaign consultant and most notably Howard Dean's campaign manager, said of McCain dropping out: "While crazy, this may be the best shot they have."

There are a whole list of Republicans who in many ways are more likely to energize the Republican base. One thing is certain -- there are candidates that will play to the core issues in ways that McCain simply can't.

Here's a list of names. Some you know, some you don't. But each of them knows their name is in play. Among them --

Ok, go ahead knock them down. One by one. See if you can really remove ALL these names from a list of candidates that are more likely to give Obama a run for his money. They'll come on the scene late, with a press corps that is looking for a horse race and a new story. Obama's frontrunner status will be upset, and there will be a set of variables that need to be calculated -- and tested against a weary electorate.

Is this supposition? Sure, but one grounded with enough history and observation to take it beyond conjecture and into the realm of the possible.

So -- before the Democrats go and game out how to beat McCain, it may be worth thinking about what happens when he says he won't accept the nomination. For the Republicans, a wide open convention would be both good theater and good politics. 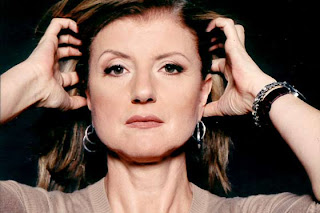 In your heart you know she is nuts. Drove her first husband into light loafers.