Hillary In Or Out? 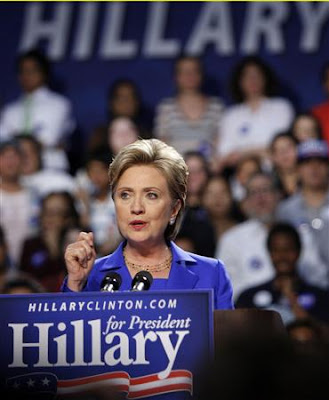 "I want to hear from you ... Share your thoughts with me."

I had a few hours to kill at Miami airport. The "D" terminal is plastered with large LCD screens of CNN (probably best watched under LSD). CNN was under its own ecstasy with their projection of Obama being the the Democratic Candidate and also bemoaning a reportedly inept speech by John McCain. I didn't see the speech but I got the drift.

Suddenly Hillary appears on all the screens to screaming banner waving supporters. I think she gave one of the best speeches of her candidacy, and it was a non-non-concession speech. The double non is in order because she is giving it some thought, but in the mean time she wants everyone to send emails and hopefully enclose some checks. She looked good and maybe her wait and see posture will work. She emphasized the Democratic Party should count every vote and by the way, she got more of them.

On a personal note, I watched the body language and facial expressions of black travelers and airport personnel. They were understandably moved and proud of their moment. So they should be. By the way, anyone see my guy's speech? How bad was it?