Can We Change Afghanistan? 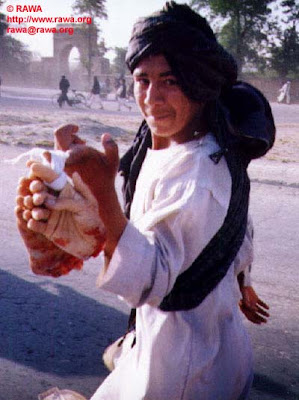 On his way to Jeffersonian Democracy.
I have argued against the long war concept for pragmatic reasons. Simply stated and IMO, the US temperament and political system will not sustain a long war. It has never happened. We pretend in the US that diversity and multi-culturism is a sign of strength. In countries such as Afghanistan, they know that tribalism means survival. The tribes in Afghansitan barely understand the concept of nationalism. For us to believe that we can convert them to our beliefs is hubris, dangerously unhinged.

The British expedition to Afghanistan is on the brink of something worse than defeat: a long, low-intensity war from which no government will dare to extricate itself. With the death toll mounting, battle is reportedly joined with the Taliban at the very gates of the second city, Kandahar. There is no justification for ministerial bombast that “we are winning the war, really”.

What is to be done? In 2001 the West waged a punitive retaliatory strike against the hosts of the perpetrators of 9/11. The strike has since followed every law of mission creep, now reduced in London to a great war of despair, in which the cabinet can do nothing but send even more men to their deaths.

In seven years in Afghanistan, America, Britain and their Nato allies have made every mistake in the intervention book. They sent too few troops to assert an emphatic presence. They failed to “hit hard and get out”, as advocated by Donald Rumsfeld, the American defence secretary. They tried to destroy the staple crop, poppies, and then let it go to warlords who now use it to finance suicide bombers, among others.

They allowed a corrupt regime to establish itself in the capital, Kabul, while failing to promote honest administration in the provinces.

They pretended that an international coalition (Nato) would be better than a unitary command (America), which it is not. They killed civilians and alienated tribes with crude air power. Finally, they disobeyed the iron law of postimperial intervention: don’t stay too long. The British ambassador threatens “to stay for 30 years”, rallying every nationalist to the insurgents’ cause.

The catalogue of western folly in Afghanistan is breathtaking.

Britain went into Helmand two years ago on the basis of gung-ho, and gung-ho still censors public debate. Yet behind the scenes all is despair. A meeting of Afghan observers in London last week, at the launch of James Fergusson’s book on the errors of Helmand, A Million Bullets, was an echo chamber of gloom.

All hope was buried in a cascade of hypotheticals. Victory would be at hand “if only” the Afghan army were better, if the poppy crop were suppressed, the Pakistan border sealed, the Taliban leadership assassinated, corruption eradicated, hearts and minds won over. None of this is going to happen. The generals know it but the politicians dare not admit it.

Those who still support the “good” Afghan war reply to any criticism by attempting to foreclose debate. They assert that we cannot be seen to surrender to the Taliban and we have gone in so far and must “finish the job”.

This is policy in denial. Nothing will improve without the support of the Afghan government, yet that support is waning by the month. Nothing will improve without the commitment of Pakistan. Yet two weeks ago Nato bombed Pakistani troops inside their own country, losing what lingering sympathy there is for America in an enraged Islamabad. Whoever ordered the attack ought to be court-martialled, except it was probably a computer.

We forget that the objective of the Afghanistan incursion was not to build a new and democratic Afghanistan. It was to punish the Taliban for harbouring Osama Bin Laden and to prevent Afghanistan from becoming a haven for Al-Qaeda training camps. The former objective was achieved on day one; the latter would never be achieved by military occupation.

A moment’s thought would show that any invasion that replaced the Taliban with a western puppet in Kabul would merely restore the Taliban as champions of Afghan sovereignty. The Americans sponsored them to be just such a puppet in the 1980s, funding some 60,000 foreign mercenaries to join them against the Russians. Intervention reaps what it sows.

Two things were known about the Taliban at the time and they are probably still true. First, under outside pressure their leaders were moving from the manic extremism of their “student” origins, even responding to demands to curb the poppy harvest. The present Nato policy of killing the older leaders and thus leaving young hotheads in charge is daft.

Second, the Pashtun Taliban are not natural friends of the Arab Al-Qaeda, despite Bin Laden being given sanctuary by the Taliban’s Mullah Omar. Bin Laden helped the Taliban by murdering Ahmed Shah Massoud, the Tajik leader, but that put a Tajik price on his head, which no man wants. Then the 9/11 coup made the Taliban pariahs even within the region.

I have yet to find reason to doubt the Afghan experts who predicted in the aftermath of 9/11 that Bin Laden and Al-Qaeda had become “unwelcome guests” in 2001 and that his days in Afghanistan, and probably on earth, were numbered.

Seven recent books on relations between Al-Qaeda and the Taliban discussed in the current edition of The New York Review of Books scream one policy message: do not drive Al-Qaeda, set on crazy world domination, into the arms of the Taliban, set only on Pashtun nationalism. Do everything to separate them. Western strategy has done the precise opposite.

The only policy that meets the original objective is one that supports anyone in the insurgent areas with sufficient authority to deny sanctuary to international terrorists. There is now plainly no way that Nato can do this.

There is much murmuring among realists that “we” should talk to the Taliban, as if we were Her Majesty’s Government dealing with the IRA. The parallel is absurd. American special forces and Anglo-Canadian units in Afghanistan are, as they jokingly admit, rather like Taliban mercenaries, who snatch and hold towns for a while but are unable to command local loyalty. They cannot hope to garrison every settlement.

Hamid Karzai, the outgoing Afghan president, is the only one who can talk. He is no fool and has been attempting to do what Kabul rulers have always done: cut deals with whichever provincial commanders appear to control territory and can forge alliances with local Taliban or whoever. That may not be the grand strategy beloved of western think tanks, but it is the realpolitik of Afghanistan.

The same realpolitik applies to the other player in the game, Pakistan, whose civilian rulers are trying to contain an army of doubtful loyalty and seek peace in tribal areas way beyond their control. Here Al-Qaeda has again forged a lethal alliance with the Taliban, drawing on an inexhaustible supply of young militants from Pakistan and abroad, as in the 1980s. The best policy would be to hurl money at Pakistan’s impoverished non-madrasah schools, rather than starve them and pour 80% of aid into a corrupt Pakistan army.

The Taliban’s chief objective is not world domination but a share of power in Afghanistan. While they cannot defeat western troops, they can defeat Nato’s war aim by continuing to build on their marriage of convenience with Al-Qaeda, which supplies them with a devastating arsenal of suicide bombers.

What is sure is that Al-Qaeda, as a (grossly overrated) “threat to the West”, will not be suppressed without Taliban cooperation. This means reversing a policy that naively equates “defeating” the Taliban with “winning” the war on terror. Fighting in Afghanistan is as senseless as trying to suppress the poppy crop. It just costs lives and money.

While it is implausible for the West to withdraw from Kabul at present, the attempt to establish military control over provincial Afghanistan is merely jeopardising the war aim. Security within the country now depends on fashioning the patchwork of alliances sought, however corruptly, by Karzai. It means dealing with reality, not trying to change it with guns and bombs.

It therefore makes sense to withdraw soldiers from the provinces and forget “nation-building” in the hope that Karzai can exert some leverage over local commanders to separate the Taliban from the Al-Qaeda cells in Pakistan. This is a race against the most appalling strategic catastrophe, a political collapse in Pakistan that may open a new and horrific front involving Al-Qaeda.

It is madness to prolong an Afghan war that can only undermine the most unstable nuclear power in the world, Pakistan. The war is visiting misery on millions and destroying western interests across central Asia. As for the claim made in parliament last week that the war is about safety on Britain’s streets, that is ludicrous.