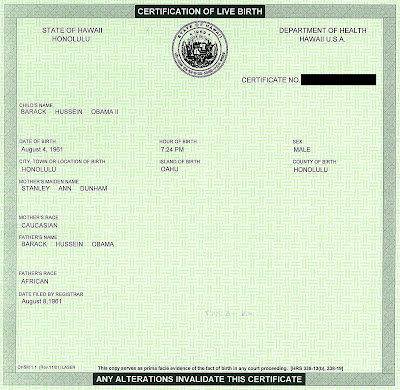 Link Here for an analysis of this certificate.

More than a few readers have asked me what I think of this article from a publication called the Israel Insider, particularly a section which suggests a Hawaiian state official has doubts about the birth certificate posted on Daily Kos and Obama’s StopTheSmears site:

I spoke to Ms. Okubo late Wednesday afternoon, and she said she had seen the version of Obama’s certificate of live birth posted on the sites. While her office cannot verify the information on a form without the permission of the certificate holder (Obama), she said "the form is exactly the same" and it has "all the components of a birth certificate" record issued by the state. In other words, she sees no reason to think the version posted on Obama's web site and Daily Kos is not genuine.

The “embossed seal” in question is, she said, probably on the back of the document provided to Daily Kos, but not visible (as in another certificate posted on Israel Insider for contrast). She thinks the difference in visibility can be attributed to the pressure used when applying the seal.

I know I was one of the guys who wondered if there was something there when Obama initially refused to provide his birth certificate to PolitiFact. It seems many people continue to think that they will uncover something that will prove Obama was born in Kenya and is therefore ineligible for office of the presidency. As I wrote in the initial post, this scenario is “rather unlikely, as it would require everyone in his family to lie about this in every interview and discussion with those outside the family since young Obama appeared on the scene.” I would add this would require Obama to lie about his birthplace in every interview going back to Harvard Law.

There are, however, other documents in the past of the Democratic nominee that would be worth a close examination. For example, they may not even exist anymore – a convenient destruction – but Obama’s office records from his service in the state legislature, particularly the correspondence, would be an interesting resource in learning more about his efforts in state government.

The Illinois State Archives told Judicial Watch that they never received any request from Senator Obama to archive any records in his possession. Similarly, in 2007, Obama said to Tim Russert that his records were “not kept.”

MR. RUSSERT: You talked about Senator Clinton having records released from the Clinton Library regarding her experience as first lady, and yet when you were asked about, “What about eight years in the state senate of Illinois,” you said, “I don’t know.” Where, where are the—where are your records?

MR. RUSSERT: Are they gone?

SEN. OBAMA: Well, let’s be clear. In the state senate, every single piece of information, every document related to state government was kept by the state of Illinois and has been disclosed and is available and has been gone through with a fine-toothed comb by news outlets in Illinois.* The, the stuff that I did not keep has to do with, for example, my schedule. I didn’t have a schedule. I was a state senator. I wasn’t intending to have the Barack Obama State Senate Library. I didn’t have 50 or 500 people to, to help me archive these issues. So...

MR. RUSSERT: But your meetings with lobbyists and so forth, there’s no record of that?

SEN. OBAMA: I did not have a scheduler, but, as I said, every document related to my interactions with government is available right now. And, as I said, news outlets have already looked at them.

SEN. OBAMA: I—Tim, I kept my own schedule. I didn’t have a scheduler.

I have no idea how Obama's statement that "every document related to state government was kept by the state of Illinois and has been disclosed and available" can be in line with the statement from the Illinois State Archives. Is there some separate archive for state legislators?