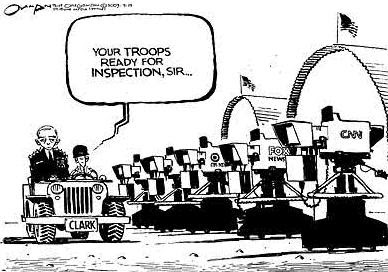 Wesley Clark, The hero of Waco, is taking shots at McCain's military service, questioning his leadership capacity in comparison to whom? Barack Obama?

Clark has best been described as a vain, pompous, brown-noser.

He answers his own argument in that he is an opportunistic example of why one who once wore a uniform is not necessarily qualified for anything.

Take a look back at the perfumed prince:

NATO's Wesley Clark is not the Iron Duke, nor is he Stormin' Norman. Unlike Wellington and Schwarzkopf, Clark's not a muddy boots soldier. He's a military politician, without the right stuff to produce victory over Serbia.

Known by those who've served with him as the "Ultimate Perfumed Prince," he's far more comfortable in a drawing room discussing political theories than hunkering down in the trenches where bullets fly and soldiers die. An intellectual in warrior's gear. A saying attributed to General George Patton was that it took 10 years with troops alone before an officer knew how to empty a bucket of spit As a serving soldier with 33 years of active duty under his pistol belt, Clark's commanded combat units -- rifle platoon to tank division - for only seven years. The rest of his career's been spent as an aide, an executive, a student and teacher and a staff weenie.

Very much like generals Maxwell Taylor and William Westmoreland, the architect and carpenter of the Vietnam disaster, Clark was earmarked and then groomed early in his career for big things. At West Point he graduated No. 1 in his class, and even though the Vietnam War was raging and chewing up lieutenants faster than a machine gun can spit death, he was seconded to Oxford for two years of contemplating instead of to the trenches to lead a platoon.

A year after graduating Oxford, he was sent to Vietnam, where, as a combat leader for several months, he was bloodied and muddied. Unlike most of his classmates, who did multiple combat tours in the killing fields of Southeast Asia, he spent the rest of the war sheltered in the ivy towers of West Point or learning power games first hand as a White House fellow.

The war with Serbia has been going full tilt for almost a month and Clark's NATO is like a giant standing on a concrete pad wielding a sledgehammer crushing Serbian ants. Yet, with all its awesome might, NATO hasn't won a round. Instead, Milosovic is still calling all the shots from his Belgrade bunker, and all that's left for Clark is to react. Milosevic plays the fiddle and Clark dances the jig. 'Stormin' Norman or any good infantry sergeant major would have told Clark that conventional air power alone could never win a war -- it must be accompanied by boots on the ground.

German air power didn't beat Britain. Allied air power didn't beat Germany. More air power than was used against the Japanese and Germans combined didn't win in Vietnam. Forty three days of pummeling in the open desert where there was no place to hide didn't KO Saddam. That fight ended only when Schwarzkopf unleashed the steel ground fist he'd carefully positioned before the first bomb fell.

Doing military things exactly backwards, the scholar general is now, according to a high ranking Pentagon source, in "total panic mode" as he tries to mass the air and ground forces he finally figured out he needs to win the initiative. Mass is a principle of war. Clark has violated this rule along with the other eight vital principles. Any mud soldier will tell you if you don't follow the principles of war you lose.

One of the salient reasons Wellington whipped Napoleon in 1815 at Waterloo is that the Corsican piecemealed his forces. Clark's done the same thing with his air power. He started with leisurely pinpricks and now is attempting to increase the pain against an opponent with an almost unlimited threshold. Similar gradualism was one of the reasons for defeat in Vietnam.

Another mistake Clark's made is not knowing his enemy. Taylor and Westmoreland made this same error in Vietnam. Like the Vietnamese, the Serbs are fanatic warriors who know better than to fight conventionally in open formations. They'll use the rugged terrain and bomber bad weather to conduct the guerrilla operations they've been preparing for over 50 years.

And they're damn good at partisan warfare. Just ask any German 70 years or older if a fight in Serbia will be another Desert Storm. It's the smart general who knows when to retreat. If Clark lets pride stand in the way of military judgment, expect a long and bloody war.