China Plans to be a Nuclear Export Powerhouse. 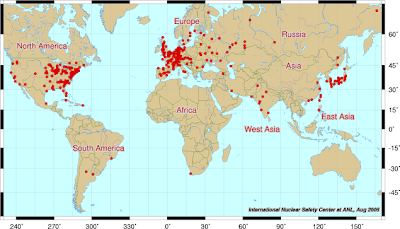 Global locations of nuclear power plants.
Maps are interesting things. It should be obvious that the US has a natural lead position to develop and exploit nuclear power. The country that dominates the market gets to define the standards.

Look at where nuclear power plants are. Look at where they are not. Do we want to allow the industry to be dominated by the Chinese and have them set the standards?

China's nuclear power firms aim to join the auto and electronic companies as export powerhouses, analysts say, but massive domestic expansion plans may not leave them the capacity to make an overseas push for more than a decade.

A $1 billion deal signed late last month with Russia to build and supply a uranium enrichment plant in China was another step toward civilian nuclear independence, less than two decades after its first nuclear generator came on stream.

The country last year sealed deals with France's Areva and US-based, Japanese-owned Westinghouse for several third-generation reactors, and the blueprints to allow them to develop domestic version.

And they have mastered the construction of older models at a speed that is impressing Asian neighbors who cannot afford or are not allowed to buy nuclear models sold by Western firms.

Countries like Vietnam and Indonesia are keen to build plants to convey a sense of modernity and to cut their fuel bills.

"They know the Chinese have a lot of money and they're not necessarily as rigid as Western investors," says Eurasia analyst Bob Herrera Lim.

"The Chinese could be the accelerator. They could say 'we're willing to take a longer-term look because these countries have a strategic value to us'. And obviously there's a lot of policy behavior in many of their companies."

And the timing couldn't be better for China, as the fight against climate change and the search for cheaper energy sources revives global interest in nuclear power.

"Their technology will improve, and worldwide demand is big so when it starts to grow at a high pace again, Areva, Westinghouse and other nuclear reactor suppliers cannot meet it on their own," says Colette Lewiner, analyst at Capgemini.

"I know it is serious because (the Chinese) told me they are looking for partners to export the technology."

But China is also ramping up its domestic nuclear expansion plans, targeting a total of 60 gigawatts by 2020. Its current nuclear capacity is only 9 GW, under 2 percent of its total installed power generation capacity.

And its own experts admit they will have to devote most of the country's technical know-how and a large portion of both listed and State-owned firms' capital to what will be the fastest nuclear build-out the world has ever seen.

It will need to start construction on about 4 new generators a year through 2015 to meet its ambitious target.
"At present it's pretty hard for our building and design equipment to meet China's own development needs, so in terms of going overseas, it's not a big target for us," says an industry source close to the government who declines to be named.

China sees nuclear plants as a partial answer for its mounting pollution and energy security problems, although China's electricity use is growing so fast that even after the breakneck expansion nuclear will provide about 5 percent of its power.

The speed of the expansion is tying China to the second-generation models that have faced teething troubles rather than the safer third-generation plants it has begun buying.

"The majority of plants started before 2013 will be that model because China is quite familiar with it," the industry expert says.

But there is no shortage of bidders. Ambitious managers at all the country's big five listed power companies want to join the sector, once the preserve of two State-owned firms.

The country's second-largest listed electricity producer, Datang International Power Generation Co Ltd has already invested in the Ningde plan in southeastern Fujian province, with the first reactor due to come on line in 2012.

Nuclear is attractive because it diversifies their generating mix, adding a type of plant with a relatively predictable operating margin because fuel is such a small portion of costs.

Despite its desire for a speedy expansion, China's focus on developing domestic technology means firms like Westinghouse and Areva are unlikely to repeat deals for entire plants.

But they will be rewarded for handing over some of their secrets by an ongoing stream of smaller deals for parts that Chinese companies are not yet able to manufacture, or cannot produce on a large scale.

"In the future, I see a two-way flow of business. There will not be so many sales of big third-generation plants but equipment sales to China will be good," Lewiner says.

"In the other direction Western firms will be re-exporting from China nuclear equipment and sharing skills," she added.

Another area where France's Areva looks set to pick up steady business in China is reprocessing nuclear waste.

"Fuel manufacturing and reprocessing of used fuel are areas where China needs Western technology, because they cannot do this on an industrial scale," she says.