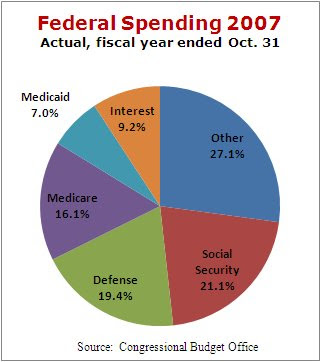 The chart tells the tale. The Republicans have not stopped spending and in fact have increased non-discretionary spending by increasing present and future obligations. Where do you go from here?
______________________
What Obama means by tax the wealthy
Here's a closer look at how the Democratic candidate defines well-off for different households, and what his proposals will mean for them.

NEW YORK (CNNMoney.com) -- Most voters are aware that Barack Obama wants to raise taxes on high-income taxpayers if he's elected president in November.

But what does the Democratic candidate mean by high-income? Who'd be affected and how? While the Obama campaign must still settle on more details about their plans, outlines are starting to emerge.

Indeed, under Obama's tax plan, married couples with at least $250,000 in gross income are likely to see their taxes go up if Obama is elected president.

But what about single filers? The line for them would likely be about $200,000, according to an Obama adviser.

Those groups could end up paying anywhere from several thousand dollars to tens of thousands of dollars more to Uncle Sam than they do now, according to estimates from the Tax Policy Center.

From income to Social Security to estates, we take a look at four areas where the high-income set and the very well off may be subject to a bigger tax bill in an Obama administration.

Obama's proposal would also reinstate some limitations on how much of a given deduction or personal exemption high-income taxpayers may take.

However, not everyone in the top two brackets would necessarily be affected by the rate increase. Much depends on whether they've been subject to the Alternative Minimum Tax (AMT) in the past.

You're supposed to calculate your tax liability under both the regular income tax code and the AMT. If your bill under the AMT is bigger, you must pay that.

The Obama rate increase would certainly narrow the spread between the two - since the amount owed under the regular code would go up. The question is would the amount you owe because of the increase exceed your AMT bill.

"Until the regular tax starts exceeding the [AMT bill], you won't have an increase," said John Battaglia, a director in the private client advisors practice of Deloitte. "But if people are deep into AMT, it wouldn't matter."

For example, if the rate increase would mean you owe $2,500 more under the regular code, but your AMT bill is normally $5,000 more than your regular bill, you would still pay the AMT.

In addition to wages up to $102,000 - the current cap on salary subject to the payroll tax, which funds Social Security - Obama would also tax amounts over $250,000.

The rate at which salary is taxed for Social Security is 12.4% (half of which is normally paid by employees and half by their employers).

We also don't know whether the benefits promised to the highest income workers would go up as a result of their paying more into the system.

"Those are details that Senator Obama would want to work out on a bipartisan basis with Congress," an Obama adviser said.

That lack of specificity concerns some tax experts. "If Obama is hinting that those making more than $250,000 would pay a higher payroll tax rate ... it would fundamentally change the way Social Security operates and run the risk of making the program look less like social insurance and more like welfare," Tax Vox blog editor Howard Gleickman wrote for the Tax Policy Center.

Long-term capital gains used to be taxed differently than dividends, which were subject to one's top income tax rate. Under the 2001 and 2003 tax cuts, gains and dividends are treated equally. Currently the most one would pay is 15%.

Both rates are scheduled to rise by 2011 - long-term gains to 20% and dividends would once again be taxed a taxpayer's top income tax rate for dividends.

Obama would continue to treat gains and dividends equally and would keep the current rate in place for everyone except high-income households.

He hasn't specified how high he'd like to make the rate, but observers expect and Obama himself has virtually said that the new rate likely would fall between 20% and 25%.

Finally, Obama's proposals to tax wealth are not only defined by income levels.

When it comes to family wealth, for instance, Obama favors maintaining the estate tax, which is scheduled to be repealed in 2010 for one year. But he would limit its reach.