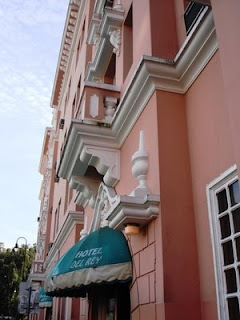 The Hotel Del Ray is the single most visited spot in Costa Rica by male American ex-patriots and tourists. It contains the means to most of the pleasures and vice known to man, much of it legal in Costa Rica. The beer is ice cold and the hookers, mostly in their late teens and early twenties, are hot. (Prostitution is legal in Costa Rica for those eighteen and older.) Gambling, Cuban cigars, Omaha steaks and Colombian drugs are all available at the Ray. It is something out of a Graham Greene novel.

A few come to watch and listen. Others come to talk.

In such places, men can be who they are. The combination of the beer and atmosphere is both intoxicating and exhilarating. They laugh, brag and share their stories and experiences. Shame is numbed and character exposed.

Lately, there are more than a few ex-Blackwater mercenaries hanging out and looking for jobs as bodyguards and personal security. They follow the dollar and will work for anyone. Their stories and bravado are presented as the curriculum vitae for their trade. If they are representative of some of the contractors we are sending to Iraq, the US would be wise not to provide such men immunity in the SOFA agreement. They should not be the face of America.

America should stop the practice and use of these mercenary contractors.

'No immunity' for Iraq contractors

A controversial deal on the long-term US military presence in Iraq will not include immunity for US contractors working in the country, the Iraqi foreign minister has said.

Speaking exclusively to Al Jazeera, Hoshyar Zebari said on Monday that the US had accepted the demand and it would be stated explicitly in the agreement.
"There would be no immunity whatsoever for private contractors because of what we've gone through with them in the past and because of the sensitivities for the Iraqi people," he said.

Zebari said his country was making major progress in finalising the deal by the end of June and the US was showing "great flexibility".

The presence of tens of thousands of foreign private security contractors in Iraq has been heavily criticised, especially after the killing last year of 17 Iraqis in Baghdad by Blackwater, a US company which protects American officials in the country.

The US and Iraq are negotiating a new agreement to provide a legal basis for US troops to stay in Iraq after December 31, when their UN mandate expires.

However the Status of Forces Agreement (Sofa) has caused controversy and angry protests in Iraq after media reports said the US was demanding immunity for contractors.

There were also reports - denied by US officials - that the deal provided for the presence of up to 50 permanent military bases in the nation.

Zebari's comments contrast with remarks last week by Nuri al-Maliki, the Iraqi prime minister, who said that talks with the US on the new long-term security pact had reached a "dead end" as the US had made demands that "hugely infringe" on Iraq.

However, David Satterfield, the US state department's senior adviser on Iraq, said last week that negotiations on the agreement were on schedule.

Zebari said the new agreement would also state that Iraq cannot be used for "any offensive actions" against "any" of Iraq's neighbouring countries, in reference to ongoing US tensions with Iran over its nuclear programme.

However, the US would be granted control of Iraqi airspace below about 9,700m, he said.

He added that the deal would not be binding for the next US president following elections in November, and that any new administration would have the right to review or terminate the agreement as it saw fit.

And the Iraqi foreign minister said he had spoken to Barack Obama, the US Democratic presidential candidate, who had assured him that, if elected, he would make "no reckless or drastic" decision to withdraw US troops from Iraq.

"Any decision for a timetable would be made through close consultation," he said.