Serbs Do Us a Favor and Burn Our Embassy 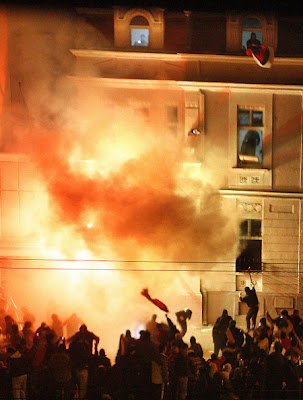 Quite simply, we never should have been involved with Kosovo for any reason. Kosovo is part of Serbia as New Mexico is to the US. No American President to date would tolerate a European country getting involved in a Mexican led move to encourage New Mexico to declare freedom and secede from The United States. It was a stupid decision by the Clinton Administration to have bombed Serbia over Kosovo.
If the Serbian government cannot find the police or troops to protect the US Embassy, leave it closed. What loss is there to the US if Serbs or Kosovars have a more difficult time coming to the United States?

I have felt for some time that the next Muslim attack on the US would come from white European Muslims and the region of former Yugoslavia is loaded with Islamic militants. There are also Serbian nationalists who despise the US and could be another source of terror. The entire region is a problem that we do not need. It is a good place to start a review on where true US interests are. Not there.
_________________________

Serbian nationalists opposed to Kosovo's independence storm the United States embassy in Belgrade, after a massive rally in the Serbian capital. Several hundred young men dressed in hooded sports tops and scarfs had broken into the premises on the main boulevard of Kneza Milosa. The embassy was not staffed at the time of the attack.

Angry demonstrators broke into an empty U.S. embassy in Belgrade on Thursday, setting fire to its facade and tossing documents out of windows to protest Washington's apparent support for Kosovo's independence.

Serbian police stood by as black smoke billowed from the embassy compound, which had been boarded up after rioters threw stones at the structure earlier in the week. Papers and chairs were thrown out of the windows, with doors wedged into burning window frames.

The attack follows a day in which an estimated 150,000 demonstrators protested against Kosovo's weekend declaration of independence from Serbia. Protesters waved Serbian flags and carried signs reading "Stop USA terror".

The subject of Kosovo's independence is extremely sensitive for Serbs, who consider the breakaway region the cradle of their medieval nationhood.