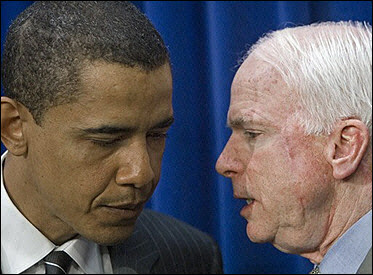 We have arrived at a time where the US is in a position of needless and preventable vulnerability. Faith and confidence in politics and government has been broken yet the paradoxical popular choice seems to be for more government and more bureaucracy.

Irrationality is rising and a whole new generation is looking for change in all the wrong places. Any change. The left wing purveyors of inspiration are in DEFCON 4. We have yet to get an explanation of what the inspiration will do, but it is a secular faith based something or another and a whole lot of people are buying what they are selling. That brings us to an answer that many of us were unprepared for and that is John McCain.

We do not have another choice and the consequences of an Obama presidency are a risk that we should not take.

Keep this in mind about the current loudspeakers of the party: If they still defend and excuse the obvious mistakes of the past, then why trust their judgment and prognosis for the future? The choice will be between McCain and Barack Hussein Obama. That is the universe we have landed in.
__________________

Hillary Clinton’s most senior advisers are in a state of “panic” about her presidential prospects and are plotting to enlist Democrat leaders in Congress to thwart her rival Barack Obama’s ambitions.

The Clinton camp is braced for Mr Obama to win a series of primary elections over the next three weeks, which they fear could hand the Illinois senator unstoppable momentum in the race for the White House.

Mr Obama has begun calling those “super delegates” - 795 congressmen and senior party officials who could break a dead heat - who are committed to Mrs Clinton, asking them to change their minds and help him wrap up the nomination.

As of tonight, the two candidates were neck and neck but Mr Obama appeared to be gaining momentum.

“He’s saying: 'Hey, I won your state and I won your congressional district, why are you supporting her?’” a Democrat strategist revealed.

The Clinton camp hopes to stop the Obama bandwagon by winning Texas and Ohio primaries on March 4, after which Mrs Clinton is planning to call on party grandees including Nancy Pelosi, Speaker of the House of Representatives and Harry Reid, the party’s leader in the Senate, to persuade Mr Obama to stand down.

Clinton aides have privately admitted that Mr Obama would only consider such a move if offered the position of vice presidential running mate, something Mrs Clinton has always been reluctant to consider.

A senior Democrat who has discussed Clinton campaign thinking with a member of her inner circle said: “The Clintons are in a state of panic. She has to win both Texas and Ohio.”

But he added that this might prove impossible if Mr Obama maintains his momentum and wins most, or all, of the nine contests which come before that.

Mr Obama was expected to do well in primary elections held in Washington state, Louisiana and Nebraska.

He is also favourite to sweep Maryland, Virginia, and Washington DC, which all vote on Tuesday, as well as Wisconsin and Hawaii, where he once lived, on February 19.

Only in Maine is Mrs Clinton confident, though Virginia and Wisconsin may also go her way.

Asked about the upcoming states, Mr Obama’s chief strategist David Axelrod told The Sunday Telegraph: “We feel comfortable with them. What was once inevitable is no longer inevitable. The momentum has switched in this race.

"We closed a 20 point gap in the national polls in the last two weeks. The more people are exposed to his message, the better he does.”

But he added: “We are up against the Clinton machine. We are the perpetual underdog and will be throughout this process. We’re ready to go all the way to the convention.”

Clinton aides believe that if Mr Obama does not deliver a knock-out blow before March 4, the advantage will swing back to her and she will argue for a deal in which uncommitted super-delegates unite behind her, to preserve party unity.

But the prospect of a deal behind closed doors, that could brush aside the views of voters in the primaries, is already creating fury in the party.

Donna Brazile, an African American strategist, said last week: “If 795 of my colleagues decide this election, I will quit the Democratic Party.”

But the Clinton camp fears that a failure to engineer a deal could lead to bitter battles at the Democrat convention in Denver in late August, which could even end with Al Gore, the former vice president, emerging as a compromise candidate.

“There’s a five per cent chance of that happening, but that’s five percent too high,” the Clinton source said.

She claimed that she received $7.5m in donations after admitting lending her campaign $5m last week.

But the source claimed that her campaign is actually in far worse financial trouble than they are letting on.

There will be no proof of how much she raised for three months, when the totals are formally declared to election watchdogs.

They now fear that he could pick Colin Powell or former congressman JC Watts, both of whom are African American, as his running mate.

But Mr McCain still has to shore up his conservative base and is actively looking at the Governors of Minnesota, South Carolina, Indiana, Mississippi, Florida and Texas: Tim Pawlenty, Mark Sandford, Mitch Daniels, Haley Barbour, Charlie Crist and Rick Perry.