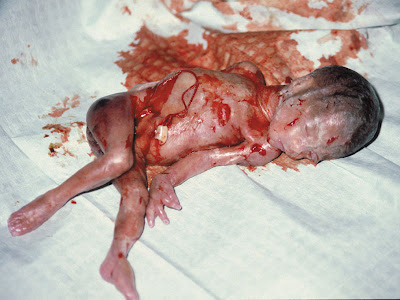 A human being at 22 weeks. A "Woman's right to choose"  killed this 22 week old. Had this girl been premature, she had a 50% chance of going home to a crib.
The Chinese are more correct at recognizing when human life begins. Be born in China, and you are one year old. Tortured language and euphemisms have been trumped by advances in medicine. Remember the "viability" argument? When does life begin? Partial birth abortion?

This is a tough topic and it should make some Democratic Presidential candidates have some very uncomfortable moments. Talk about an inconvenient truth at a very inconvenient time. The truth can hurt.
_________________
Survival of early babies 'doubles'
By Rebecca Smith, Medical Editor Telegraph
Last Updated: 01/02/2008


The abortion debate is reignited today as figures show that survival rates of babies born very prematurely have doubled in the past 20 years.

A study at one of Britain's top neonatal units found that one third of babies born between 22 and 25 weeks' gestation survived in the early 1980s but this had risen to 71 per cent by the late 1990s.

The biggest improvements were among the 24 and 25-week babies.

Campaigners have already called for the 24-week abortion limit to be lowered, but experts have previously argued there has been little improvement in the chances of babies born very early.

The findings are set to spark a further row over abortion as MPs are tabling amendments to the Human Fertilisation and Embryology Bill to either liberalise terminations or restrict them. The 24-week limit was set in 1990.

Of eight babies born alive at 22 weeks at University College London Hospital between 1996 and 2000, four survived to go home. Between 1991 and 1995 only two were born at 22 weeks and neither lived.

However, one quarter of all the infants were found to have a disability when they reached their first birthday. This proportion did not improve over the years.

Julia Millington, from the ProLife Alliance, said: "The current 24-week time limit was set in 1990 based on the gestational age a foetus was considered viable at that time.

"Neonatal medicine has progressed since then and premature babies are capable of surviving below the current time limit."

Prof David Field, the president-elect of the British Association of Perinatal Medicine, said: "The viability of premature babies and abortion are completely different arguments that have been muddled up. You either believe in abortion or you don't.