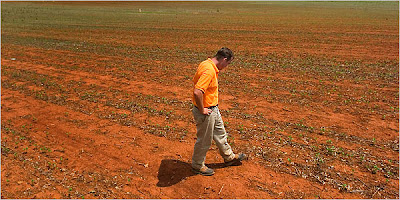 I will defer to Bobal for further comment on the potential significance to this exciting scientific breakthrough.
__________________
Scientists advance 'drought crop'
By Matt McGrath
BBC News science reporter

Scientists say they have made a key breakthrough in understanding the genes of plants that could lead to crops that can survive in a drought.

Researchers in Finland and the United States say they have discovered a gene that controls the amount of carbon dioxide a plant absorbs.

It also controls the amount of water vapour it releases into the atmosphere.

This information could be important for food production and in regulating climate change.

Plants play a crucial role in the regulation of the atmosphere by absorbing carbon dioxide from the air. They absorb the gas through tiny pores on their leaves called stomata and these pores also release water vapour as the plant grows.

In extremely dry weather, a plant can lose 95% of its water in this way.

Scientists have been trying to find the gene that controls the response of the stomata for decades.

Now teams in Finland and California are reporting in the journal Nature that they have found a crucial genetic pathway that controls the opening and closing of these pores.

The researchers say that this understanding could allow them to modify plants so that they continue to absorb carbon dioxide but reduce the amount of water released into the atmosphere, enabling them to thrive in very dry conditions.

"It opens the avenue, it is still several years away but before this publication, there was no single component which would have so many different effects... there was no target to modify, now we know the target," he said.

While the experiments have been done in a variety of cress, the scientists say that the underlying genetic mechanisms are the same in many food plants, including rice.

It is believed that this new genetic understanding of how to control the amount of water that plants use could be commercialised within the next 20 years.