Nine in 10 officers said the war had stretched the military “dangerously thin”. 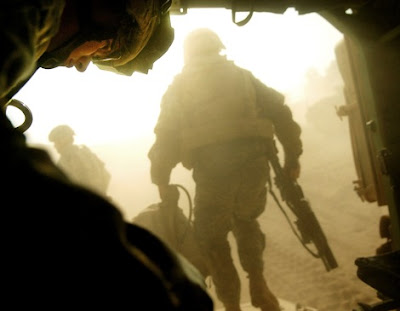 The Iraq war has strained the US military to the extent that America could not fight another large-scale war today, according to a new survey of military officers.

Nine in 10 officers said the war had stretched the military “dangerously thin”. However, 56 per cent disagreed with the suggestion that the conflict had “broken” the armed services, while 64 per cent said morale was high.

More than 3,400 current and retired officers, including more than 200 generals and admirals, participated in the survey by Foreign Policy magazine and the Center for a New American Security, a centrist think-tank.

The results underscore the concerns of officers about the strain that the wars in Iraq and Afghanistan have placed on the military. Of respondents, 60 per cent said the military was weaker today than five years ago.


The results of the independent survey come as the Pentagon debates whether to pause the reduction of forces in Iraq, or whether to make further cuts to ease the stress on the military. The Pentagon is unwinding the “surge” by reducing the number of combat brigades to the pre-surge level of 15, which would leave about 130,000 troops in Iraq by the summer.

General David Petraeus, the US commander in Iraq, wants to pause the reduction to assess the impact of removing the surge, which commanders credit with dramatically reducing violence in Iraq. But General George Casey, his predecessor in Iraq and now the army chief of staff, advocates further reductions.

Gen Casey has warned that the military was deploying at unsustainable rates, and was in danger of crossing a “red line” beyond which it would take a generation to rebuild.

Retired Lieutenant General Greg Newbold, a survey respondent who also participated in the generals’ revolt – a string of calls from senior military figures in 2006 for the resignation of then defence secretary Donald Rumsfeld – said the survey showed that the Pentagon could not afford to be complacent.

“If the question had been ‘Are we in danger of straining the military in ways that may take a generation to recover?’, the answer might have been different,” said Lt Gen Newbold.

“We ought to be very careful that we don’t overplay the degree of selfless sacrifice and patriotism that we are relying on from a number of people in the military, the mid-grade officers and mid-grade non-commissioned officers that are really the backbone of the services.”

The extended and repeated deployments in Iraq and Afghanistan have led to concerns about the US military’s ability to respond to other potential threats, including Iran, North Korea or a conflict with China over Taiwan.

According to the survey, 80 per cent of respondents believed it would be “unreasonable” to ask the US military to wage another large war today; 37 per cent also said Iran had gained the greatest strategic advantage from the Iraq war, compared with 19 per cent who saw the US as having gained the most.

In a worrisome result for the Pentagon, which has attempted to repair the damage done to its image by the Abu Ghraib prison scandal, 44 per cent of respondents disagreed with the statement that “torture is never acceptable”; 43 per cent also disagreed that waterboarding – an interrogation practice that simulates drowning – was torture, in spite of the fact that it is banned by the army field manual.

Labels: US in Iraq