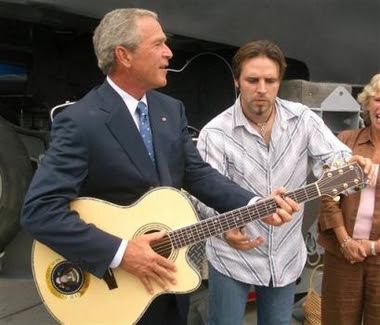 Oh, and when is that attack on Iran I've read was going to be the hallmark of the Bush Administration going to launch?

Mr Bush, who, it was promised by many, would not leave it to the "next" Administration, is running out of time. The drums are not even beating, now. Who supposes that they will pick up the tempo, in the coming months, with the Election cycle already in full swing?

Are those Chinese built Panamax tankers underway, are those refineries under construction in China ready for Hugos' crude?

Bet that if not, they almost are.

While the US dithers about with windmills and tide surges. With out the distillery capacity under construction to replace Hugo's crude. So we'll be sending more dollars to Arabia. The Wahabbists will come out a head, again.

The hallmark of Team-43, the ascendancy of the Wahabbists in Arabia. Thankfully the lessons of 9-11-01 were fully learned, and the secular Arabs were defeated, leaving the Wahabbists free rein in the region.

After almost six years of Coalition Occupation, Sharia Rules in Basra! That emblem of Coalition success. While the 1920 Brigades, renamed as Concerned Local Citizens, rule in Anbar.

And the streets of Anbar are safe, as they could have been on 28 Jun 2003 if the US had allowed local elections to go forward, instead of establishing a military occupation.

An occupation that has failed to achieve the desired Goals, the restructuring of Iraqi society, the removal of the Tribes as local power players.

Five years wasted and a trillion USD, with little to show for it but a military that is worn out and now ill equipped. Along with $90 dollar oil and Wahabbists rolling in dough.

Why not unify with Mexico, expand the empire at home, it's a lot less costly. If done above board and not covertly. An ongoing operation that makes Charlie Wilson's War look like childs' play.

It was the Wahabbists that were supposed to be the threat, they were in the light, while American unification was the real play.

Now the Wahabbists have won in the MidEast and American unification is moving forward, with the GOP leading the way.