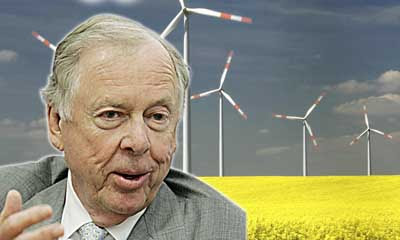 *Nobody can come up with better names than they do in the American South.

You have to love this quote: "Pickens originally backed Rudy Giuliani for president. Asked what happened to his campaign, Pickens said: "My guy rode up in front of the grandstand and fell off his horse. I've never seen anything come and go as fast as Rudy's campaign."
_____________________
Pickens: U.S. Faces Disaster over Oil Wealth Exodus Money News

One of America's most influential businessmen, legendary oilman T. Boone Pickens, says the nation's wealth is being plundered by oil exporters and the U.S. faces a potential financial disaster if our energy policy is not reformed.
Pickens, who correctly predicted that oil would top $100 a barrel, also says he expects oil prices to drop sharply in the near term.

Appearing on CNBC's "Squawk Box" Thursday morning, Pickens pointed out that the U.S. is currently sending half a trillion dollars out of the country each year to buy oil, in some cases from people who "are our enemies."

"We can't stand that. Wealth is moving out of the country...

"Not one presidential candidate has addressed this … The candidates have to get up to speed on what energy cost is doing to our country." Pickens even turned on his own industry, oil, and called for an increase in alternative energy sources.

"If we do not get on the alternative energy bandwagon and if we don't have a global recession, we could be sitting on $150 oil in two years," he told CNBC.

Pickens touched on a number of other points:

Pickens told CNBC he now backs John McCain for president. Asked if the Republicans can win the White House this year, he said simply: "Sure."