Dr Rowan Williams, Off With His Head. 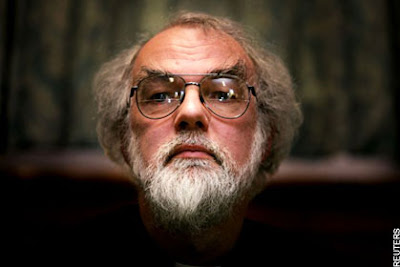 The Archbishop of Canterbury caused consternation yesterday by calling for Islamic law to be recognised in Britain.

He declared that sharia and Parliamentary law should be given equal legal status so the people could choose which governs their lives.

This raised the prospect of Islamic courts in Britain with full legal powers to approve polygamous marriages, grant easy divorce for men and prevent finance firms from charging interest.

His comments in a BBC interview and a lecture to lawyers were condemned at a time when government ministers are striving to encourage integration and stop the nation from "sleepwalking to segregation".

The Prime Minister rapidly distanced himself from Dr Williams's view. Gordon Brown's spokesman said: "Our general position is that sharia law cannot be used as a justification for committing breaches of English law, nor should the principles of sharia law be included in a civil court for resolving contractual disputes.

"The Prime Minister believes British law should apply in this country, based on British values."
Dr Williams's words opened a chasm over Islam between senior leaders of the Church of England, who are already trying to deal with an Anglican war over gay rights which broke out after he was appointed archbishop.

And the Archbishop of York Dr John Sentamu, who has been fiercely critical of Muslim extremists, said last year that "the imposition of sharia law, Britain as a Muslim society - that will never happen".

In his lecture, 57-year-old Dr Williams said that "we have to think a little harder about the role and rule of law in a plural society of overlapping identities". More if you can stand it.