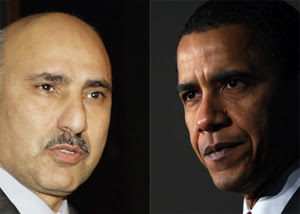 Geez, I thought he was Italian
Antoin "Tony" Rezko and Barack Obama are deeply linked throughout his political career and have been friends since 1990. In 13 years in politics, Obama has recieved at least $168,000 in campaign donations from Rezko, his family and his business associates. One connection is Allison S. Davis, of Davis Miner Barnhill & Galland, the firm Obama joined in 1993 straight out of Harvard, which specialized in helping to develop low-income housing. Davis is a friend of Tony Rezko, who was one of the firm's top clients. Davis was and is a member of the Chicago Plan Commission, appointed by Mayor Daley.

Allison S. Davis was appointed by Gov. Blagojevich to the Illinois State Board of Investment, which controls state pension funds. The firm of Davis Miner helped Rezko's firm Rezmar get more than $43 million in government funding to rehabilitate half of their 30 buildings for the poor. How is that for government investing?

Did I mention that when Obama ran for the U.S. Senate, Rezko held a cocktail party at Rezko's home, picking up the tab for the reported lavish event. Obama's campaign staff has said it has no records to show who attended that party, or how much it cost. It happened on June 27, 2003.

In October 2006, Rezko was indicted for extortion of businesses seeking to do business with the Illinois Teachers Retirement System Board and the Illinois Health Facilities Planning Board. In addition, he has been charged with wire fraud for staging false transactions of his pizza stores in order to secure $10 million in loans from GE Capital. The case is being prosecuted by Patrick Fitzgerald who prosecuted the case against Scooter Libby arising from the CIA leak scandal.
_____________________________
February 26, 2008
The Obama-Rezko plot thickens (updated)
Thomas Lifson American Thinker

Rezko, an Obama fundraiser, helped facilitate Obama's purchase of a $1.65 million mansion in Chicago's Hyde Park neighborhood for $300,000 below the asking price. The owner wished to sell both the house and an adjoining lot. Mrs. Rezko paid the full asking price of $625,000 on the same day that the Obamas purchased their luxury home. At a substantial discount. The seller denies that there was any connection between the two transactions. Later, a small portion of the land was sold to the Obamas so that they could expand their garden.

Now it develops that Mr. and Mrs. Rezko apparently lacked the money to make the purchase of the plot of land.

In a sworn statement a year later, Mrs Rezko said she got by on a salary of $37,000 and had $35,000 assets. Mr Rezko told a court he had "no income, negative cash flow, no liquid assets, no unencumbered assets [and] is significantly in arrears on many of his obligations."

A company related to Mr Auchi, who has a conviction for corruption in France, registered the loan to Mr Obama's bagman Antoin "Tony" Rezko on May 23 2005. Mr Auchi says the loan, through the Panamanian company Fintrade Services SA, was for $3.5 million.

There is much yet to be learned about the web of transactions involved, but it now appears that money originating from a convicted Middle Eastern wheeler-dealer found its way to indicted Chicago wheeler-dealer Tony Rezko, and then weeks later provided the means for a nearly simultaneous land transaction that enabled the Obamas to buy their home for substantially below asking price.

It certainly doesn't look like change we can believe in, when it comes to Chicago politics.

Update: much, much more from Chicagoan Rick Moran, writing at Rightwing Nuthouse:

The Obama-Rezko relationship must be understood in the context of the influence peddling, the casual corruption, the cronysm, the favoritism shown in less than open bidding – all part of a city and state political culture where the politician, the businessman, and the crook frequently rub elbows and sometimes wear each other’s hats. Obama hiring the daughter of a Rezko associate to work in his office (after Rezko had helped raise tens of thousands of dollars for his campaign) is no big deal. But this kind of “favor” done for Rezko is a different story:


The Chicago Tribune: “On June 13, the Chicago Sun-Times reported that as a state senator, Obama wrote letters to city and state officials supporting Rezko’s successful bid to get more than $14 million from taxpayers to build apartments for senior citizens. The Sun-Times said the deal included $855,000 in development fees for Rezko and his partner, Allison S. Davis, Obama’s former boss, according to records from the project, which was four blocks outside Obama’s state Senate district.
Obama now regrets his association with Rezko and has given $150,000 to charity in order to atone for his sins.

Sorry Barry but it don’t work that way.