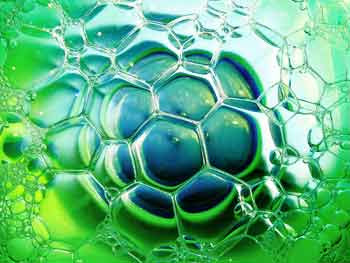 Maritime biologist Professor Hein de Baar of the University of Groningen, the Netherlands, and the Royal Netherlands Institute for Sea Research says that algae are ideal as biofuel. Algae yield ten times as much biofuel compared to for instance corn or rapeseed, are easy to grow, are not a human food source and can be produced CO2 neutral. Professor De Baar hopes that within a few years there will be cars running on algae oil.

Algae are the most common plants on earth. What is more: the planet's biomass is for the most part made up of algae. If biofuel could be produced from algae especially grown for this purpose, CO2 emissions could be reduced substantially. Professor De Baar explains how:
"Algae need CO2 to grow, you could call it 'algae food'. So an intensive algae nursery would require large quantities of CO2. So you need to keep adding CO2, which would be no problem at all if you were to hook up your nursery to a power plant.
Just imagine, the plant's smoke stack emits CO2, which is captured and injected into large containers with algae situated next to the plant. The algae, which will start to grow very fast, can then serve as fuel for the power plant, thus creating a closed circle without any emission of CO2."

Biofuels have a bad reputation because some of them also serve as food for humans. In
Latin America prices of corn have gone up because the crop is being used for fuel production. There is no such problem with algae, even though some species are used as animal fodder, but that's at most a by-product.

Food production and algae nurseries are not incompatible. Professor de Baar describes what a future algae nursery may look like:
"Big containers, which would have to be transparent to allow sunlight to enter. It could be a vertical container of several metres high, which would be aerated with air rich in CO2. Another option is to have a mixture of algae and water flow through a series of horizontal pipes.
At first the water would be quite clear, with some nutrients added, but it would end as a kind of pea soup, which can be pumped straight into a factory. The algae would be filtered out so they could be processed as fuel."

Algae are such a logical choice when considering options for biofuel production, that the question arises why it wasn't taken up ages ago, but Hein de Baar says it's a matter of simple economics. When crude oil was still selling for only 20 US dollars a barrel, serious research into the potential of algae as biofuel held little appeal. However, with the price of a barrel of light sweet crude now hovering around the 100-dollar mark, it has become cost-effective.

The University of Groningen in the Netherlands has set up a consortium with the Royal Netherlands Institute for Sea Research and Dutch businesses, which in a few years is to result in the large-scale growing of algae for biofuel. Professor de Baar is fully confident that the enterprise will be a success.