US Shoot Down of Satellite Is a Warning to Iran 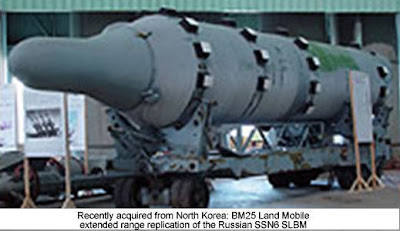 And you can add others to the warning. The technological achievement is staggering and the diplomacy and security advantage should be obvious. The US has demonstrated that a first strike attempt by an enemy could come to naught, and the follow-up US retaliation would be nation ending. The system needs to be continually advanced and a new generation of unmanned fighter and bomber warplanes would insure US dominance for another generation. The consequences in not committing the resources are extremely dangerous. Some of you may want to think about that when contemplating a vote for Obama.
_____________________

Wednesday night's SM-3 shoot-down of a US spy satellite tumbling out of its orbit was a magnificent success for anti-missile defense. It meant hitting a bullet with a bullet, with only a ten-second time window for the shot. The hit was kinetic, meaning that there was no conventional warhead to explode, and the SM-3 hit the fuel tank of the bus-sized spy satellite right in the sweet spot in order to disperse the toxic propellant. The small pieces left over will now burn up in the atmosphere.

The SM-3 was traveling at 17,000 miles per hour when it hit the spy sat. The target was "cold," so that heat-seeking sensors designed to locate hot missiles were not even used. This was a last-minute modification of an anti-missile system for a special job, an extraordinary technical achievement, and one that is now sending ripple effects all around the world. The Chinese People's Army and the Russkis are all upset, poor babies. But this fast, off-the-shelf demonstration of US technical prowess was really a direct shot across the bows of Iran -- and also North Korea.

Why? Because the Russians and Chinese have had ICBMs for decades and never used them. They respond to the balance of terror in a rational way. But Iran and North Korea are constantly threatening us, unpredictable, and often crazy-sounding.

Just this week we heard official statements like this:

Well, "Hizbullah" means "party of Allah," and that refers to the whole Khomeini cult, not just its Lebanese lapdog. So "radiation therapy" from the Party of Allah has a pretty clear meaning. Tehran's head guru, Ayatollah Khamenei, also explained that Allah hates any Iranians who don't support the nuke program. Exactly where he found that in the Koran wasn't explained.

Meanwhile, North Korea is in the middle of a succession struggle, always the trickiest time in family despotisms. The Syrians, too, have been getting NoKo help on nuclear power, according to Israeli sources.

The Iranian opposition group that keeps leaking the mullah's nuke secrets has just presented evidence that they really do have a working factory to make nuclear warheads, at a town called Khojir, built in cooperation with the North Koreans. Since fabricating ing a nuclear warhead is not difficult once you have the uranium or plutonium, this sounds believable. That news knocks the last leg out from under the rickety fantasy world of the last US National Intelligence Estimate.

So this is a crucial time to demonstrate to the rogues that the West can defend itself. That is why the administration chose this time to show off our anti-missile defense capability.

The brilliance of our anti-missile systems is that they can move and fast and stealthily from place to place. Aegis cruisers like the one that just shot down the spy satellite can be sent to any navigable sea in the world, very close to North Korea, Iran, and Syria. If Chavez ever buys missiles from his friends in Tehran, or if Castro's successor does, the US Navy can be in range the next day. Once we get laser weapons mounted on aircraft, we will have even faster and more flexible defenses. That technology is not far away.

So this is an historic moment for the good guys. For the first time since Stalin exploded an atom bomb in 1949 there is a working defense against nuke-bearing missiles and planes. Real civilizations -- large cities surrounded by farms to feed them -- have always depended upon walls, moats, and natural defenses. That is the only reason why we have the prosperity and culture that began with Sumer 6,000 years ago. But defense and aggression are always in a race -- the liberal fantasy that arms races are somehow abnormal in history is just ignorant.

What's different about the last half century is that city-killing weapons have put the aggressor at a major advantage, so that a High Noon standoff was the only answer. That horrific period is now passing as missile defenses come into their own. We are coming back to a more normal balance. That is a very good thing.

So when you vote in the Fall, don't forget who made missile defenses possible.

(Hint: It wasn't the Democrats).