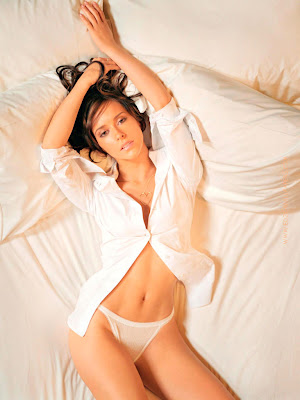 Hugh Hewitt, not Jennifer Love Hewitt, but this is better to look at.
Wednesday, February 06, 2008
Seven Reasons To Support The GOP's Nominee
Posted by: Hugh Hewitt at 10:10 AM

(If we were using West Virginia rules, we'd get the Huck folks to revote right now and get one of the GOP candidates to 50%.)

Senator McCain has a clear path to the nomination, Romney a very uphill battle, and Huck is fighting for 2012 at this point and for a win in a major vote outside of the south. Certainly they should all stay in through the primaries ahead because it isn't over and because our side needs the excitement of a campaign in such key falls states as Wisconsin, Ohio and Pennsylvania to keep the MSM from turning 100% of its attention on to growing the Obama phenomenon. They ought to be scheduling three man debates in every state, making their points and taking every opportunity to look ahead to the fall.

At the same time, Romney and Huckabee ought to begin to note Senator McCain's lead and urge their followers to recognize that if they cannot come back they and their followers will have to come in and join the party's eventual nominee. Senator McCain would do well to make a similar statement though his lead is significant and his collapse unlikely. Putting Humpty Dumpty together again cannot wait for St. Paul. Each of the three need to strike some common chords again and again, beginning with why the GOP needs to retain the White House, regardless of who its nominee is.

There are seven reasons for anyone to support the eventual nominee no matter who it is: The war and six Supreme Court justices over the age of 68.

Folks who want to take their ball and go home have to realize that even three SCOTUS appointments could revolutionize the way elections are handled in this country in a stroke, mandating the submission of redistricting lines to court scrutiny for "fairness."

"It is undeniable that political sophisticates understand such fairness and how to go about destroying it," Justice Souter announced in his diseent in Veith v. Jubilerer, the Pennsylvania redistricting case in which the Court declined by a vote of 5 to 4 to immerse itself in the details of the partisan redistricting of Pennsylvania.

If Democrats control the White House and gain even one of the five seats held by the center-right majority of current justices, this and many other crucial issues are up for legal grabs. When activist judges are more than willing to rewrite rules of long-standing, periods of exile should never be self-imposed "for the good of the party." Exiles can go on a very long time indeed. Ask the Whigs.

They can go on indefinitely when enforced by courts.

The GOP as well is the party committed to victory in Iraq and the wider war. A four year time-out would be a disaster, a period of time in which al Qaeda and its jihadist off-shoots would regroup in some places and continue to spread in others. Iran, even if punished in the months before November, would certainly continue and accelerate its plans under the soft pleadings of a President Obama or Clinton 2.0.

These aren't the years to wish a pox on your primary opponents' heads beyond June.

I don't expect the principals to let up on each other in the two months ahead, and I am especially looking forward to the Ohio and Texas votes.

But it is very possible to play full contact politics without the threat of going home if your team loses. The stakes in the fall are far too high for that