The Chinese Plan to Sucker Punch The United States Military 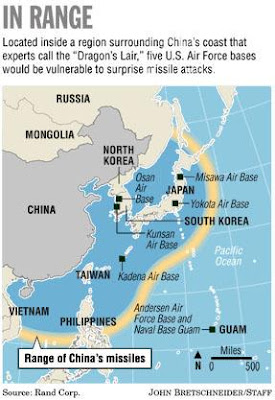 Because the American public is “abnormally sensitive” about military casualties, according to an article in China’s Liberation Army Daily, killing U.S. airmen or other personnel would spark a “domestic anti-war cry” on the home front and possibly force early withdrawal of U.S. forces. (“The U.S. experience in Somalia is usually cited in support of this assertion,” according to the Rand report.) Once this hard-and-fast assault on U.S. bases commenced, the Chinese army would “swiftly divert” its forces and “guard vigilantly against enemy retaliation,” according to a Chinese expert.

In a hypothetical future scenario, the U.S. and China are poised to clash — likely over Taiwan.

It’s designed to strike America’s military suddenly, stunning and stalling the Air Force more than any other service. In a script written by Chinese military officers and defense analysts, a bruised U.S. military, beholden to a sheepish American public, puts up a small fight before slinking off to avoid full-on war.

This strategic outlook isn’t hidden in secret Chinese documents. It’s printed in China’s military journals and textbooks. And for much of last year, Mandarin literates and defense experts — working for the Santa Monica, Calif.-based Rand Corp. on an Air Force contract — combed through a range of Chinese military sources.

They emerged with “Entering the Dragon’s Lair,” a lengthy report on how the Chinese People’s Liberation Army would likely confront the U.S. military and how the Air Force in particular can brace itself. In many cases, the theoretical enemy nation China’s officers discuss in these scenarios isn’t explicitly named but is unmistakably the U.S.

“These aren’t war plans,” said report co-author Roger Cliff, a former Defense Department strategist and China military specialist who spoke to Air Force Times from Taiwan. “This is the military talking to itself. It’s not designed for foreigners or even China’s general public to read.”

When it comes to conflict with the U.S., Chinese military analysts favor age-old schoolyard wisdom: Throw the first punch and hit hard.

“Future conflicts are likely to be short, intense affairs that might consist of a single campaign,” Cliff said. “They’re thinking about ways to get the drop on us. Most of our force is not forward-deployed.”

China’s experts concede its army would lose a head-on fight, with one senior colonel comparing such a scenario to “throwing an egg against a rock.” Instead, the Chinese would attempt what Rand calls an “anti-access” strategy: slowing the deployment of U.S. forces to the Pacific theater, damaging operations within the region and forcing the U.S. to fight from a distance.

“Taking the enemy by surprise,” one Chinese military expert wrote, “would catch it unprepared and cause confusion within and huge psychological pressure on the enemy and help [China] win relatively large victories at relatively small costs.” Another military volume suggests feigning a large-scale military training exercise to conceal the attack’s buildup.

U.S. facilities in South Korea and Japan, even far-south Okinawa, sit within what Rand calls the “Dragon’s Lair”: a swath of land and sea along China’s coast. This is an area reachable by cruise missiles, jet-borne precision bombs and local covert operatives. Air Force bases within this area include Osan and Kunsan in South Korea, as well as Misawa, Yokota and Kadena in Japan. And in a conflict over Taiwan, any nation allowing “an intervening superpower” such as the U.S. to operate inside its territory can expect a Chinese attack, according to China’s defense experts.

China is designing ground-launched cruise missiles capable of nailing targets more than 900 miles away — well within striking range of South Korea and much of Japan, according to the report. Cruise missiles able to reach Okinawa — home to Kadena Air Base — are in development.

The Chinese would first launch “concentrated and unexpected” attacks on tarmacs using runway-penetrating missiles and, soon after, would target U.S. aircraft. Saboteurs would play a role in reconnaissance, harassing operations and even “assassinating key personnel,” according to another military expert.

Because the American public is “abnormally sensitive” about military casualties, according to an article in China’s Liberation Army Daily, killing U.S. airmen or other personnel would spark a “domestic anti-war cry” on the home front and possibly force early withdrawal of U.S. forces. (“The U.S. experience in Somalia is usually cited in support of this assertion,” according to the Rand report.) Once this hard-and-fast assault on U.S. bases commenced, the Chinese army would “swiftly divert” its forces and “guard vigilantly against enemy retaliation,” according to a Chinese expert.

Dumb and blind The PLA also would likely use less conventional attacks on the American military’s vital communications network. The goal, as one Chinese expert put it: leaving U.S. combat capabilities “blind,” “deaf” and “paralyzed.”

Losing early-warning systems designed to detect incoming missiles would be, for the Air Force, the most devastating setback — one that could force the service to exit the region altogether, according to Rand.

China could also launch a nuclear “e-bomb,” or electromagnetic explosive, that would fry U.S. communication equipment while ionizing the atmosphere for minutes to hours, according to the report. This would likely jam radio signals in a 900-mile diameter beneath the nuclear fireball.

The PLA could also employ long-range anti-satellite missiles — similar to one successfully tested last January — to destroy one or more American satellites. However, the PLA has a host of less dramatic options: short-range jammers hidden in suitcases or bombs and virus attacks on Air Force computer networks.

Shielding against a swift Chinese onslaught is, according to Rand, as simple as reinforcing a runway or as complex as cloaking the orbit of military satellites.

In the short term, U.S. air bases inside the Dragon’s Lair should add an extra layer of concrete to their runways and bury fuel tanks underground. All aircraft, the report said, should be parked in hardened shelters, especially fighter jets.

Parking larger aircraft — bombers, tankers and E-3 Sentry Airborne Warning and Control Systems jets — in hard-shell hangars would be expensive and difficult but likely worth the cost, according to the report.

U.S. fighter jets remain the best defense against incoming Chinese missile attacks. But, given China’s taste for sudden attacks, surface-launched missile defense systems must be installed long before a conflict roils. Because the PLA is expected to strike quickly, the report said, waiting for the first tremors of conflict is not an option.

The Air Force also should fortify itself against Chinese hackers by using software encryption, isolating critical computer systems and preparing contingency plans to communicate without a high-bandwidth network. Though China maintains a “no first use” nuclear bomb policy, the U.S., according to Rand, should warn China that nuclear electromagnetic pulse attacks will be considered acts of nuclear aggression and could prompt nuclear retaliation.

Rand insists the Air Force must defend satellites — which support communication, reconnaissance, bomb guidance and more — against China’s proven satellite-killing missiles. This could be accomplished in the Cold War tradition of mutually assured destruction by threatening to retaliate in kind if the PLA blasts U.S. satellites.

“That might be the one restraining factor,” Cliff said. “They might not want to start that space war.”

Or, Rand suggests, the U.S. could invest heavily in satellite protection or evasion techniques, including stealth, blending in with other satellite constellations or perhaps developing and deploying microsatellites capable of swarming to defend larger satellites, which the Defense Advanced Research Projects Agency is working toward.

Could this really happen? The Chinese first-strike strategy is “more than hypothetical,” according to the report. But in the near term, at least, it’s considered unlikely.

If the most contentious issue is Taiwan, Cliff said, then the likely trigger would be Taiwanese elections, where assertions of complete independence from the mainland can infuriate Chinese leaders. China’s current president, Hu Jintao, has built up China’s military but also its ties with America. In 2012, however, when Taiwan holds an election and mainland China’s leadership is expected to turn over, perhaps for the worse, the risk of conflict could increase.

“It really depends on the circumstances,” Cliff said. “Would Taiwan be the provocateur? If so, it might be hard for the American public to support intervention.”

However, if China moves to capture control of the island, Cliff said he believes the U.S. would face a rocky dilemma.

“Are we really going to let a small, democratic country get snuffed out by a huge authoritarian country — especially when you think about how our own country came into existence?” Cliff said.

As China pours more resources into its evolving and expanding military, it buys the power to more strongly assert itself against America. In November, China denied U.S. Navy minesweepers shelter from a storm and, in another incident that month, turned down an Air Force C-17 flight shuttling supplies to the American consulate in Hong Kong. Experts speculate this was a rebuff to American arms sales to Taiwan, as well as President Bush’s autumn meeting with the Dalai Lama, the exiled spiritual leader of another state China claims, Tibet.

“If this conflict happened today, I’m certain we’d prevail,” Cliff said. “But as time goes on, that’s not a given.”