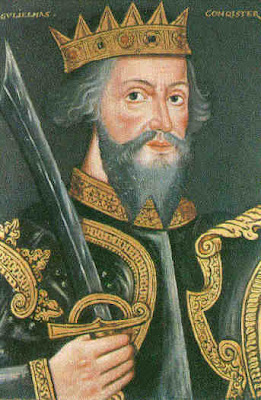 After William the Conquerer won the Battle of Hastings in October 1066, it took him two more months to consolidate his control of England to become acclaimed King of England and crowned on December 25, 1066, in Westminster Abbey.

A sophisticated medieval form of government was handed over to the Normans and grew even stronger under William. The Normans centralised the autonomous shire system. (Sound familiar?)

The Domesday Book exemplifies the practical codification which enabled Norman assimilation of conquered territories through central control of a census. It was the first kingdom-wide census taken in Europe since the time of the Romans, and enabled more efficient taxation of the Norman's new realm. (Sound more familiar?) The process continues and grows with the internet. The great resource of the period, The Domesday Book, is now an online resource.
________________________

The holy grail of data: it's Domesday, online
William the Conqueror's great census is made available free on the internet

'Not even one ox, nor one cow, nor one pig was left out.' But what William the Conqueror didn't have in the Domesday Book was an easy way of searching its reams of data. It has taken more than 900 years, but at last the internet has provided a solution.

Professor John Palmer, whose work on the Domesday Book stretches back 25 years, has transformed its handwritten parchment pages into a database with searchable indexes, a detailed commentary and the ability to organise all its statistics in a tabulated format.

The Domesday Book, the oldest and most famous public record, was based on the 1086 great survey of England which investigated 'how the country was occupied, and with what sort of people... how much each had... and how much it was worth'. It covered 13,418 settlements south of the rivers Ribble and Tees.

As with the Last Judgment, all were called to account - hence the name, Domesday, Day of Judgment. There would be nothing like it in England again until the censuses of the 19th century.

But for nearly 1,000 years it has been inaccessible to most people and difficult to understand. There are costly CD-Rom translations, and the National Archives provides online searches, but Palmer set out to create a new format to bring the book into the digital age. Whereas the original has information listed under headings, Palmer has coded and tagged terms so they can be automatically retrieved and analysed. His software makes it possible to isolate certain variables and conduct several searches at once. The results can be displayed as a map, table or translated text, or as a combination of formats.

The three-year project was funded by a £250,000 grant from the Arts and Humanities Research Council.

Palmer, who worked on the project with his son, Matt, said: 'My interest in Domesday began in about 1980 as a teaching project. My son was getting interested in computing at the same time. It developed into a research