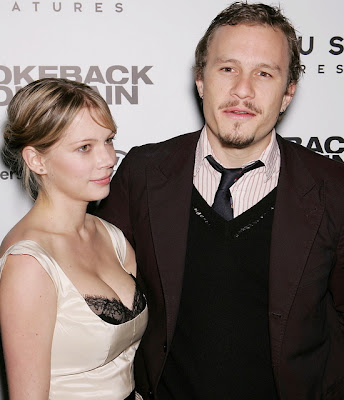 Hollywood was instrumental in the spread of drugs through the culture of the world. They mainstreamed the use into the culture and helped main line the junk through the veins of millions. The affects are felt in the narco wars in Columbia, Mexico and Afghanistan. The misery, crime, disease, death and human suffering are noted most when one of their own self destructs. There is a long dismal list. Heath Ledger appears to be another wreck on the heap.

January 31, 2008 -- Heath Ledger had become a regular user of cocaine and heroin in the past year, getting so high on drugs that an exasperated Michelle Williams was forced to boot him out of their Brooklyn home, The Post has learned.

"She couldn't take it any more. Heath wouldn't show up for two to three days, and all of a sudden he would show up on her doorstep, an absolute wreck," a member of Ledger's entourage who did drugs with him told The Post's Lorena Mongelli. "He was partying, doing drugs. She didn't like the company he was keeping. She gave him an ultimatum and threatened to get custody of the girl. He wanted to make it work, but it was this scene he was wrapped up in. Was he an addict? Yeah."

The revelation comes as "Entertainment Tonight" and "The Insider" said that "out of respect for Heath Ledger's family," they would drop plans to air a video of Ledger snorting cocaine with a rolled-up bill at the Chateau Marmont. The video was taped without Ledger's knowledge following the SAG Awards two years ago. PageSix.com reports that Ledger quips on the tape, "I'm gonna get so much [bleep] from my girlfriend. We have a baby together, Matilda."

Heath's drug pal told The Post the 28-year-old star's mushrooming fame had him constantly exposed to drugs. As the pressures of work grew, he couldn't say no, and then wouldn't get help. "He was hanging out with a bad crowd. He wasn't cleaning up his act. He was making absolutely no effort . . . He was really into heroin. He wasn't sleeping or communicating with anyone."

Ledger's lifeless body was found in his Broome Street loft in SoHo last week along with six kinds of prescription pills. Authorities believe he overdosed, although the cause of death won't be official until toxicology tests are finished.

"At the end of the day this is really tragic," the source said. "He was a nice guy. I first met him in 2002. He was scared about the whole Hollywood thing . . . I don't think he realized how crazy it was going to be. So many people wanted a piece of him."

But, the pal adds, things got really bad when heroin entered the picture. "Once you go down that road, then it gets really scary. Because all of sudden you shoot up, you take heroin, then you do a line of cocaine and then you take sleeping pills. Look at River Phoenix, he died exactly the same way."
Ledger's reps didn't get back to us.