Why is Bush calling for Kosovo's Independence? 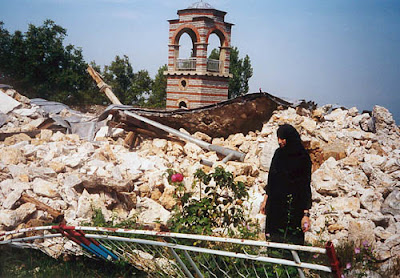 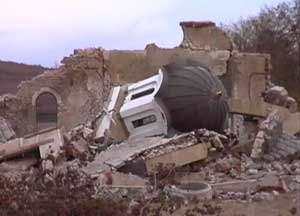 Is there any limit to this man's foolishness? What strategic interest does the US have in encouraging a narco-criminal Islamic state appearing in Western Europe? There surely are enough things stirred up in enough places without President Bush proving once again he belongs somewhere else far from any office of responsibility. Does he not see the irony in his support for open US borders and amnesty, and what has happened to Kosovo?

Since the NATO/UN intervention in 1999, Kosovo has become the crime capital of Europe. The sex slave trade is flourishing. The province has become an invaluable transit point for drugs en route to Europe and North America. Ironically, the majority of the drugs come from another state "liberated" by the West, Afghanistan. Members of the demobilized, but not eliminated, KLA are intimately involved in organized crime and the government. The UN police arrest a small percentage of those involved in criminal activities and turn them over to a judiciary with a revolving door that responds to bribes and coercion. The objective of the Albanians is to purge all non-Albanians, including the international community's representatives, from Kosovo and ultimately link up with mother Albania thereby achieving the goal of "Greater Albania." The campaign started with their attacks on Serbian security forces in the early 1990s and they were successful in turning Milosevic's heavy-handed response into worldwide sympathy for their cause. There was no genocide as claimed by the West -- the 100,000 allegedly buried in mass graves turned out to be around 2,000, of all ethnic origins, including those killed in combat during the war itself.

The Kosovo-Albanians have played us like a Stradivarius. We have subsidized and indirectly supported their violent campaign for an ethnically pure and independent Kosovo. We have never blamed them for being the perpetrators of the violence in the early '90s and we continue to portray them as the designated victim today in spite of evidence to the contrary. When they achieve independence with the help of our tax dollars combined with those of bin Laden and al-Qaeda, just consider the message of encouragement this sends to other terrorist-supported independence movements around the world.

''Sooner rather than later you have got to say 'Enough is enough, Kosovo is independent,''' Bush said during a news conference with the Prime Minister of Albania.

Bush, standing alongside Albanian Prime Minister Sali Berisha, urged Albania to help maintain calm and peace in Kosovo as the province's independence process moves forward. He said any plan to extend talks must have the goal of 'certain independence.'

Mr Bush said he was “worried about expectations not being met” in Kosovo, where 90 percent of the population are ethnic Albanians demanding independence from Serbia and where Nato leads a peacekeeping force of 17,000 troops.