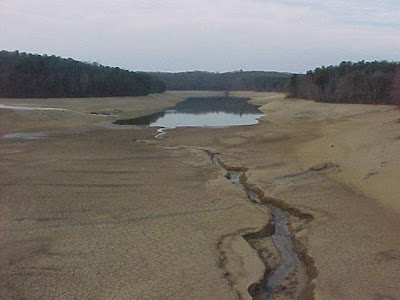 The wrath of 2007: America's great drought
By Andrew Gumbel in Los Angeles The Independent
Published: 11 June 2007

America is facing its worst summer drought since the Dust Bowl years of the Great Depression. Or perhaps worse still.

From the mountains and desert of the West, now into an eighth consecutive dry year, to the wheat farms of Alabama, where crops are failing because of rainfall levels 12 inches lower than usual, to the vast soupy expanse of Lake Okeechobee in southern Florida, which has become so dry it actually caught fire a couple of weeks ago, a continent is crying out for water.

In the south-east, usually a lush, humid region, it is the driest few months since records began in 1895. California and Nevada, where burgeoning population centres co-exist with an often harsh, barren landscape, have seen less rain over the past year than at any time since 1924. The Sierra Nevada range, which straddles the two states, received only 27 per cent of its usual snowfall in winter, with immediate knock-on effects on water supplies for the populations of Las Vegas and Los Angeles.

The human impact, for the moment, has been limited, certainly nothing compared to the great westward migration of Okies in the 1930 - the desperate march described by John Steinbeck in The Grapes of Wrath.

Big farmers are now well protected by government subsidies and emergency funds, and small farmers, some of whom are indeed struggling, have been slowly moving off the land for decades anyway. The most common inconvenience, for the moment, are restrictions on hosepipes and garden sprinklers in eastern cities.

But the long-term implications are escaping nobody. Climatologists see a growing volatility in the south-east's weather - today's drought coming close on the heels of devastating hurricanes two to three years ago. In the West, meanwhile, a growing body of scientific evidence suggests a movement towards a state of perpetual drought by the middle of this century. "The 1930s drought lasted less than a decade. This is something that could remain for 100 years," said Richard Seager a climatologist at Columbia University and lead researcher of a report published recently by the government's National Oceanic and Atmospheric Administration (NOAA).

While some of this year's dry weather is cyclical - California actually had an unusually wet year last year, so many of the state's farmers still have plenty of water for their crops - some of it portends more permanent changes. In Arizona, the tall mountains in the southern Sonoran desert known as "sky islands" because they have been welcome refuges from the desert heat for millennia, have already shown unmistakable signs of change.

Predatory insects have started ravaging trees already weakened by record temperatures and fires over the past few years. Animal species such as frogs and red squirrels have been forced to move ever higher up the mountains in search of cooler temperatures, and are in danger of dying out altogether. Mount Lemmon, which rises above the city of Tucson, boasts the southernmost ski resort in the US, but has barely attracted any snow these past few years.

"A lot of people think climate change and the ecological repercussions are 50 years away," Thomas Swetnam, an environmental scientist at the University of Arizona in Tucson, told The New York Times a few months ago. "But it's happening now in the West. The data is telling us that we are in the middle of one of the first big indicators of climate change impacts in the continental United States." Across the West, farmers and city water consumers are locked in a perennial battle over water rights - one that the cities are slowly winning. Down the line, though, there are serious questions about how to keep showers and lawn sprinklers going in the retirement communities of Nevada and Arizona. Lake Powell, the reservoir on the upper Colorado River that helps provide water across a vast expanse of the West, has been less than half full for years, with little prospect of filling up in the foreseeable future.

According to the NOAA's recent report, the West can expect 10-20 per cent less rainfall by mid-century, which will increase air pollution in the cities, kill off trees and water-retaining giant cactus plants and shrink the available water supply by as much as 25 per cent.

In the south-east, the crisis is immediate - and may be alleviated at any moment by the arrival of the tropical storm season. In Georgia, where the driest spring on record followed closely on the heels of a devastating frost, farmers are afraid they might lose anywhere from half to two-thirds of crops such as melons and the state's celebrated peaches. Many cities are restricting lawn sprinklers to one hour per day - and some places one hour only every other day.

The most striking effect of the dry weather has been to expose large parts of the bed of Lake Okeechobee, the vast circular expanse of water east of Palm Beach, Florida, which acts as a back-up water supply for five million Floridians. Archaeologists have had a field day - dredging the soil for human bone fragments, tools, bits of pottery and ceremonial jewellery thought to have belonged to the natives who lived near the lake before the Spanish arrived in the 16th century.

Environmentalists are not entirely upset, because the lake is notoriously polluted with pesticides and other farm products that then poison nearby rivers. River fish stocks in the area are now booming.

Nothing, though, was so strange as the fires that broke out over about 12,000 acres on the northern edge of the lake at the end of May. They were eventually doused by Tropical Storm Barry last weekend. State water managers, however, say it will may take a whole summer of rainstorms, or longer, to restore the lake.

The Dust Bowl was the result of catastrophic dust storms causing major ecological and agricultural damage to American prairies in the 1930s. The fertile soil of the Great Plains had been exposed by removal of grass during ploughing over decades of ill-conceived farming techniques. The First World War and immense profits had driven farmers to push the land well beyond its natural limits.

When drought hit, the soil dried, became dust, and blew eastwards, mostly in large black clouds. This caused an exodus from Texas, Arkansas, Oklahoma, and the surrounding Great Plains, with more than half a million Americans left homeless in the Great Depression.