"We hate al-Qaeda, but at the same time we don't like the Americans" 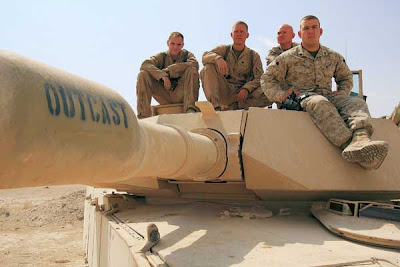 Tribal Coalition in Anbar Said to Be Crumbling
U.S.-Backed Group Has Fought Al-Qaeda in Iraq
By Joshua Partlow and John Ward Anderson


BAGHDAD, June 10 -- A tribal coalition formed to oppose the extremist group al-Qaeda in Iraq, a development that U.S. officials say has reduced violence in Iraq's troubled Anbar province, is beginning to splinter, according to an Anbar tribal leader and a U.S. military official familiar with tribal politics.

In an interview in his Baghdad office, Ali Hatem Ali Suleiman, 35, a leader of the Dulaim confederation, the largest tribal organization in Anbar, said that the Anbar Salvation Council would be dissolved because of growing internal dissatisfaction over its cooperation with U.S. soldiers and the behavior of the council's most prominent member, Abdul Sattar Abu Risha. Suleiman called Abu Risha a "traitor" who "sells his beliefs, his religion and his people for money."

Marines conduct a security patrol in Anbar province, where U.S. forces have has cooperated closely with the tribal Anbar Salvation Council. (By Joe Raedle -- Getty Images)

Abu Risha, who enjoys the support of U.S. military commanders, denied the allegations and said the council is not at risk of breaking apart. "There is no such thing going on," he said in a telephone interview from Jordan.

Lt. Col. Richard D. Welch, a U.S. military official who works closely with the tribal leaders in Iraq, said that relations inside the group were strained and that he expected a complete overhaul of the coalition in coming days.

U.S. military leaders hailed the creation of the nearly nine-month-old Anbar Salvation Council, first known as the Awakening, as one of the most important developments in the four-year war, signaling that insurgents and the local population in Anbar, which is overwhelmingly Sunni, have begun to see al-Qaeda in Iraq as their worst enemy, rather than the United States and its allies.

Since the tribes began working with U.S. forces to resist al-Qaeda in Iraq -- and since they began receiving significant amounts of weapons and vehicles -- violence in the province and deaths of U.S. soldiers there have fallen dramatically.

But the divisions within the coalition underscore what many see as a central dilemma: Should the United States be sponsoring profit-oriented tribal groups that involve themselves in sometimes fragile alliances and that could turn against U.S. troops?

"The question with a group like this always is, does it stay bought?" said Anthony H. Cordesman, a military analyst at the Center for Strategic and International Studies in Washington, referring to suggestions that the United States is paying for loyalty from the tribes.

Although backing the tribal coalition looks like "the least bad option" under the current circumstances, he said, "The key is, what can the Iraqi government offer them over time, and is it enough for them to stay with the bargain?"

Gen. David H. Petraeus, the top U.S. military commander in Iraq, has disputed the notion that U.S. forces were buying the loyalty of the tribes, saying that they opposed al-Qaeda in Iraq on ideological grounds and noting that many tribal leaders had been killed by the extremist group.

"I think they've done this for their lives," Petraeus said during a recent briefing on Anbar. "This is not just a business deal they've struck. When you oppose al-Qaeda, you are putting it all on the line. This is not an economic issue." more here