The Fruit of Islam. The Noble Muslim Man.


Abuse of woman is tolerated, taught and accepted in Islam, one beautiful religion. This needs to be exposed and rebuked. Why it is not is a puzzlement to me. There is no excuse for the silence from woman's groups on this continuing outrage. 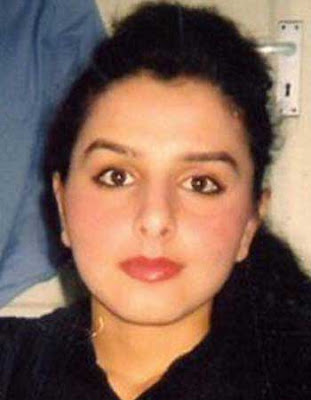 Banaz Mahmod, 20, was strangled with a boot lace, stuffed into a suitcase and buried in a back garden, by her father, for his honor.

LONDON — A father who ordered his daughter brutally slain for falling in love with the wrong man in a so-called "honor killing" was found guilty of murder on Monday.

Banaz Mahmod, 20, was strangled with a boot lace, stuffed into a suitcase and buried in a back garden.

Her death is the latest in an increasing trend of such killings in Britain, home to some 1.8 million Muslims. More than 100 homicides are under investigation as potential "honor killings."

Mahmod Mahmod, 52, and his brother Ari Mahmod, 51, planned the killing during a family meeting, prosecutors told the court. Two others have pleaded guilty in the case. Two more suspects have fled the country. Sentencing is expected later this month.

The men accused the young woman of shaming her family by ending an abusive arranged marriage, becoming too Westernized and falling in love with a man who didn't come from their Iraqi village. The Kurdish family came to Britain in 1998 when Banaz Mahmod was 11.


"She was my present, my future, my hope," said Rahmat Suleimani, 29, Banaz Mahmod's boyfriend.

During the three-month trial, prosecutors said Mahmod's father beat his daughter for using hairspray and adopting other Western ways. Her uncle once told her she would have been "turned to ashes" if she were his daughter and had shamed the family by becoming involved with the Iranian Kurd, her sister 22-year-old Bekhal Mahmod testified.

Banaz Mahmod ran away from home when she was a teenager but returned when her father sent her an audio tape in which he warned he would kill her sisters, her mother and himself if she did not come home, her sister said.

She was later hospitalized after her brother attacked her, the sister told the court. The brother said he had been paid by their father to finish her off but in the end was unable to do it, said the sister, who testified in a full black burqa. She said she still feared for her own life.

The years of Banaz Mahmod's abuse were compounded by police officers who repeatedly dismissed her cries for help.

She first went to police in December 2005, saying she suspected her uncle was trying to kill her and her boyfriend. She sent police a letter naming the men who she thought would later kill her.

On New Year's Eve, she was lured by her father to her grandmother's home, where she suspected he planned to attack her after he forced her to gulp down brandy and approached her while wearing gloves. She escaped by breaking a window and was treated at a hospital.

Police dismissed her suspicions, and one officer, who is under investigation, considered charging her with damages for breaking her grandmother's window.

Laying in her hospital bed after the escape, Mahmod recorded a dramatic video message saying she was "really scared."

The videotape, taken by her boyfriend at the hospital, was shown to the jury during the trial.

After she was released from the hospital, she returned home and tried to convince her family she had stopped seeing her boyfriend.

But friends told the family they spotted the couple together on Jan. 22, 2006.

Soon after, a group of men allegedly approached her boyfriend and tried to lure him into a car but he refused. It was that event that prompted Banaz Mahmod to go to police again. This time officers tried to persuade her to stay in a safe house. She refused, believing that her mother would protect her.

But her mother and father left her alone in the house the next day. Her boyfriend alerted police after time passed in which she failed to send him text messages.

Britain has seen more than 25 women killed by their Muslim relatives in the past decade for offenses they believed brought shame on the family. More than 100 other homicides are under investigation as potential honor killings.

"We're seeing an increase around the world, due in part to the rise in Islamic fundamentalism," said Diana Nammi with the London-based Iranian and Kurdish Women's Rights Organization.