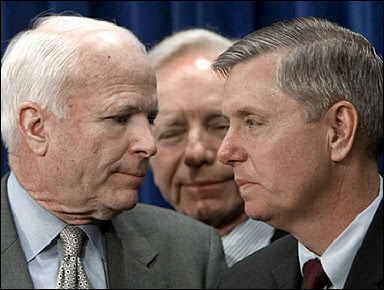 Washington is seductive. It tempts, it spoils, and it corrupts. Too many mediocre politicians step into their senatorial or congressional roles, look into the mirror and see themselves through a magnifying glass. Mark Twain got it right when he quipped, “The offspring of riches: Pride, vanity, ostentation, arrogance, tyranny.” Washington tempts with a spoil of riches. Men of modest accomplishments and abilities forget how they got to Washington and who sent them there. None is more deserving of a reminder than Lindsey Graham.

At a time when The Bush Administration and the Republicans in congress need Republican support for Iraq and US policy in the Middle East, they choose to dissipate that support by pursuing this foolish amnesty bill. Let's not forget them later.

Thanks to Sen. Lindsay Graham's high-profile help in crafting an immigration reform bill that has stalled in the Senate, constituents call and leave screaming messages on his office voice mail.

WASHINGTON --
Lee Rogers, chairman of the Republican Party in Anderson County, S.C., was at the beach last week when his cellphone rang.
It was an urgent call from one of Rogers' GOP activists.

''He asked me what I was going to do to find somebody to run against Lindsey Graham [next year],'' Rogers said. ``I explained to the gentleman that's not something I can put together as a single county chairman. That's got to happen with the people.''

It could be happening.

Graham, nearing the end of his first Senate term, has taken plenty of heat before, but perhaps never like this.

Thanks to his high-profile help in crafting an immigration reform bill that has stalled in the Senate, constituents call and leave screaming messages on his office voice mail.

''No amnesty! No amnesty!'' one repeat caller yells for a minute or more in angry overnight messages that greet his aides in the morning.

Graham's staff estimates that his Senate offices have received about 3,000 letters, phone calls, e-mails and faxes about immigration in the last month, most of them critical of him.

Talk-radio hosts within and beyond South Carolina deride Graham as a Ted Kennedy toady.

Rush Limbaugh has taken to calling him ``Lindsey Grah-amnesty.''

Bloggers challenge his manhood, assault his patriotism, mock his intelligence.

Still worse, for where he comes from, they belittle his Southern heritage.

Furious Republican loyalists lobby online for someone -- anyone -- to step forward and challenge Graham in the 2008 primary when he seeks reelection.

www.dumplindsey.org, gets dozens of comments a day, few of them friendly.

With Graham's high national as well as statewide name recognition and his campaign war chest approaching $4 million, GOP political operatives say, any window for mounting a viable campaign against him is closing fast.

''There could be some potential political damage, but whether or not his nomination is in jeopardy, I don't know,'' said Rogers. ``If somebody's going to do it, they need to do it now, and they need to get at it.''

Graham said he's ready for any opponent, Republican or Democrat.

''Anyone who runs against me better get up early and stay late because I think I've been one heck of a good senator for my state and my party,'' Graham said Thursday in an interview. ``I intend to seek office on the basis that I am not afraid to do what needs to be done.''

Graham says all the political fire and brimstone comes with his job. ''You can call me by any name you want to call me,'' Graham said. ``I'm 51 years old, and I'm not going to be deterred by ugly things being said about me. If I am no bigger than that, I'm in the wrong job.''

While Graham is confident he will be reelected next year, he said he is willing to risk losing his Senate seat if that's the price for taking on tough problems.

''I had rather lose my job as a senator than to pass the buck and not deal with the hard problems,'' Graham said. ``I have never been afraid of talking about difficult, emotional issues because I believe that's what most people want me to do. People are really upset that our borders are broken, and I am too.''