Turkey has plans to move against Iraq Kurds -Gul 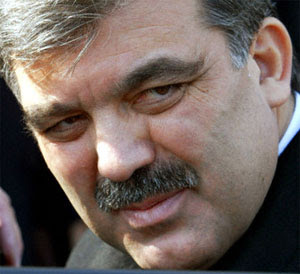 Like an exhausted and broke hedge fund, that bet on the wrong sides of all markets, the Bush Administration blew it on amnesty. He has lost many of his base supporters. Why he did it at a time he needed all the support he could muster for his Iraq policies, is inexplicable. Foreign leaders, themselves politicians, have noticed and so has Turkey.

Turkey is going its own way. Turkey has concluded that Iraq will collapse when the US begins to withdraw. It is on the verge of destabilizing the most stable part of Iraq.

ANKARA, June 29 (Reuters) - Turkey has prepared detailed plans for a cross-border operation into Iraq against Kurdish rebels and will act if U.S. or Iraqi forces fail to tackle them, Foreign Minister Abdullah Gul was quoted as saying on Friday.

Ankara has on many occasions threatened to send troops into mainly Kurdish northern Iraq to hunt down thousands of militants from the outlawed Kurdistan Workers Party (PKK) who use the region as a base from which to attack targets inside Turkey.

"The military plans have been worked out in the finest detail. The government knows these plans and agrees with them," Gul told the Radikal newspaper in an interview.
"If neither the Iraqi government nor the U.S. occupying forces can do this (crush the PKK), we will take our own decision and implement it," Gul said.

Washington has urged Turkey, a NATO ally, not to enter northern Iraq, arguing such a move would destabilise one of the few relatively peaceful regions of the war-shattered country.

The United States, like Turkey, classes the PKK as a terrorist organisation. But it says its forces are too stretched battling insurgents in central Iraq.
Iraq has also warned Turkey against making an incursion.

Gul denied any difference of opinion between Turkey's government and its powerful military on northern Iraq.

"A cross-border operation is a serious issue. State institutions need to act in harmony on such issues," he said.

The head of the Turkish military repeated his call this week for permission to go into northern Iraq, saying it would not end the PKK problem but would strike a big blow against the rebels.

More than 30,000 people have been killed in fighting between Turkish security forces and the PKK since the rebels launched their armed campaign for an independent homeland in mainly Kurdish southeast Turkey in 1984.