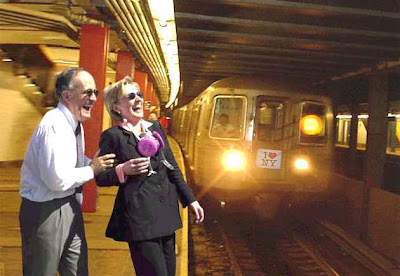 Then he debuted his first Internet advertisement of the campaign, accusing the former first lady of turning her back on US troops, after voting to authorize the war in Iraq in 2002, and now demanding an end to the conflict.

Giuliani took Clinton to task over an advertisement by liberal anti-war group MoveOn.org, which ran in the Times earlier this week with a headline of "General Petraeus, or General Betray US?"

"Just when our troops need all our support to finish the job, Hillary Clinton is turning her back on them," says a narrator in the web ad.

"General Petraeus and the brave men and women now serving under him deserve an apology. And our nation deserves better. Senator Clinton, do the right thing. Apologize for your comments and condemn the MoveOn.org ad."

The advertisement juxtaposed Clinton's arguments favoring the case against former Iraqi leader Saddam Hussein during the debate over whether to go to war in late 2002, with her criticisms of Petraeus this week over Iraq.

Clinton said during a hearing of the Senate Armed Services committee on Tuesday that both Petraeus and US ambassador to Baghdad Ryan Crocker had been unfairly saddled with the job of being war spokesmen for Bush.

"The reports that you provided for us, really require the willing suspension of disbelief," she said, serving up a large helping of statistics to counter claims by the two men that the current troop surge plan was working.

Clinton has said if she knew in 2002 what she knows now about Saddam's lack of weapons of mass destruction, she would not have voted to authorize the war.

She has also argued that she expected Bush to use the authority he was given by Congress to bolster the US negotiating position and reach a diplomatic solution to the Iraq crisis, rather than driving quickly to war.

Her vote on Iraq had been seen as a threat to her White House aspirations, but she has escaped major political damage, and enjoys a wide lead in national polls of the Democratic race.

Giuliani, who heads national surveys for the Republican nomination, is running a campaign rooted in his leadership role in New York following the September 11 attacks in 2001.

He backs Bush's surge strategy, and accused Democrats of ignoring a mortal threat to US security from global Islamic radicalism.

His attack on Clinton will be seen an attempt to partly court conservative Republican voters who despise the New York Senator, and have yet to warm to his campaign.