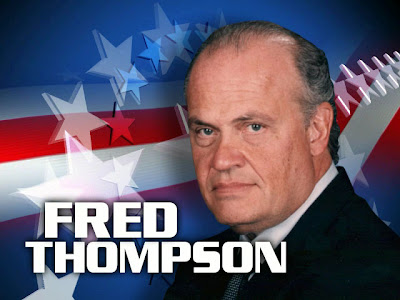 Put me in the pragmatic column on the next national election. The Democrats controlling all branches of government seems very likely. The Republicans under Bush have not impressed a majority of American voters. That self-inflicted damage is possibly terminal for Republican chances. It took some real talent to make Democratic rule look desirable to the majority of American voters, but that is where we are.

I doubt Thompson will make the cut and if he does I do not see how he can win, but I did not see how Clinton could win the first time.

Thompson is Clearly in Over His Head
By Dick Morris

He may be the tallest candidate in the race for president, but Fred Thompson is clearly in over his head! In both his fumbling pre-candidacy period and his hesitant, attenuated post-announcement campaign, he's given the clear impression that that he is ill-informed, inarticulate, badly briefed and downright lazy.

Consider the news his candidacy has generated:

•He refuses to take a pledge not to raise taxes;

•He lobbied for an abortion advocacy group before becoming a U.S. senator;


•He employed his son in a no-show job for $170,000 for four years at his political action committee after leaving office;

•As a lobbyist, he helped the attorney representing the Libyan terrorists who blew up Pan Am 103 over Lockerbie,
Scotland, to fight requests to extradite them to the U.K. to stand trial;

•His other lobbying clients included Jean-Bertrand Aristide, the leftist Haitian dictator who, but for a lack of oil, would have been the Hugo Chavez of the last generation;

•He skipped and is skipping the first two debates of his presidential candidacy and said he was looking forward to attending the Oct. 14 New Hampshire debate -- the one that was cancelled weeks ago;

•He is taking this week off from presidential campaigning;

•He does not know enough about the details of the Terry Schiavo case to comment.;

•He is also unfamiliar with the proposal to lower soaring insurance premiums Floridians must pay for home storm coverage since the hurricanes;
•He said that Iraqis were supporting us because of al Qaeda's ban on smoking;

•He's run through three campaign managers and as many communications directors in just three months;

•He fell short in the fundraising competition, coming up with only a net of $2.8 million by the end of July;

•After leaving the Senate, he picked up his lobbying career by representing Equitas, an insurance company he helped dodge paying for asbestos/cancer claims;

•After negative publicity about his comments suggesting that Cuban immigrants were potential suicide bombers, he blamed Hillary Clinton for causing the publicity by "releasing a statement that she made trying to capitalize on something when she knew better";

•He didn't know enough about drilling in the Everglades to comment.

Not bad for the first two weeks of a presidential campaign!

Thompson is counting on his conservative positions on social issues and the wunder-dust generated by his "Law & Order" stardom to propel him into the lead in the presidential race. But, as Harriet Miers's failed candidacy for the Supreme Court suggests, one does not just need to be conservative to prevail. It takes a little talent, too. Thompson seems to lack the interest, energy, will, ability and stamina to compete at this level.

Hillary is probably the next president anyway. But there is only one way to defeat her -- to nominate a candidate whose anti-terrorism credentials are so deep that if Americans return to their senses and grasp the nature of the dire and continuing threat we face, he can prevail in November. There are two candidates who fill that bill: Rudy Giuliani and John McCain. Neither Thompson nor Romney approach it.

But beneath his casual, disorganized and ill-informed way of running for president, one suspects an arrogance lingers -- a sense of not needing to prepare and a lethargy in the face of challenges that perhaps indicates a failure to appreciate how daunting a task running for president really is. Whatever the cause, the opening weeks of Thompson's candidacy are, perhaps, the least auspicious of any candidate's in recent history, and certainly the worst of the 2007-2008 electoral season.

Morris, a former political adviser to Sen. Trent Lott (R-Miss.) and President Bill Clinton, is the author of ““Outrage.” To get all of Dick Morris’s and Eileen McGann’s columns for free by email, go to www.dickmorris.com.